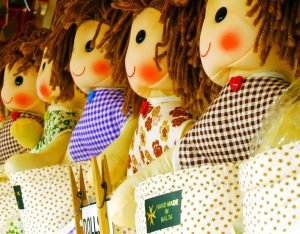 People who worked in factories that produced cloth dolls may have to be added to the list of people at risk of developing deadly malignant pleural mesothelioma.

A new Italian study is the second study to draw a link between cases of the lung-related asbestos cancer and doll manufacturing.

The new study utilized data from the Province of Brescia Mesothelioma Registry, which has been tracking malignant mesothelioma cases in the region since 1993. Researchers analyzed a total of 757 cases of pleural mesothelioma that occurred through 2016.

“We found three cases of pleural epithelial mesothelioma histologically diagnosed in young women who had worked in two doll manufacturing companies and whose asbestos exposure had been initially defined as ‘unknown’,” writes study author Pietrogino Barbieri in an Italian occupational medicine journal.

Although malignant mesothelioma is usually linked to on-the-job asbestos exposure, dollmaking in not a profession traditionally associated with asbestos, which is why the cause of the women’s mesothelioma was originally overlooked.

Worldwide, mesothelioma affects more than twice as many men as women, primarily because men are more likely to have worked in jobs, such as shipbuilding or construction, that exposed them to asbestos.

In most cases, female mesothelioma patients with no apparent occupational asbestos exposure are assumed to have come in contact with the carcinogen in their environment, their home, or through exposure to a spouse’s work clothes. But none of these exposures could be confirmed in the young dollmakers.

It was an electron microscope that allowed doctors to finally draw a connection between the dollmakers’ jobs and their mesothelioma diagnoses. An extensive autopsy, including electron microscopy, on one of the three women showed a concentration of amphibole asbestos fibers of about 12,000,000 per gram of lung tissue.

Because of this finding, the cause of the woman’s mesothelioma was reclassified from “unknown” to “occupational certified”. The other two mesothelioma victims who also worked in dollmaking were assumed to have experienced similar exposure.

The authors of the new study note that one other published study reported cases of mesothelioma associated with the manufacture of cloth dolls.

An international group of researchers have provided recommendations for countries to create a mesothelioma registry. Mesothelioma registries are great tools to monitor the negative effects of asbestos. It can help to identify clusters of asbestos exposure. Registries can also track the impact of asbestos reduction programs. Asbestos Health Risks Asbestos is a naturally occurring mineral that has been found throughout the world. Even though it is toxic, it is used in manufacturing and construction in many countries around the world. Mesothelioma is a cancer that is caused by exposure to asbestos. It grows in the lining of organs like the lungs. Generally, those who develop mesothelioma show no signs of illness for a long time after their first exposure. It … END_OF_DOCUMENT_TOKEN_TO_BE_REPLACED