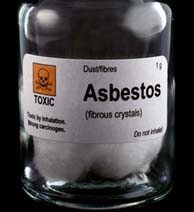 Even though the cause of mesothelioma – exposure to asbestos – is well-known, it is not always easy for a mesothelioma patient to find his or her own ‘asbestos connection’.

For people who worked in asbestos-filled job environments, such as asbestos mines or factories which manufactured asbestos-containing products, the connection can be obvious. The same is true for mesothelioma patients who have worked as electricians, plumbers, construction workers, or in ship building or demolition – all careers where exposure to asbestos materials was common.

But for others, the link can be more challenging.  Since work history can be a vital part of diagnosing mesothelioma, not knowing where, or even if, a person has been exposed to asbestos can delay treatment and impact prognosis.  That was the challenge in the case of Maureeen Whittaker, a British grandmother who died of mesothelioma earlier this spring at the age of 58.

Although Whittaker never worked in a job traditionally associated with asbestos exposure, she did spend some time working on an assembly line in a company that produced gas fireplaces. Because the company is now closed and no proof of asbestos exposure exists, Whittaker’s doctors, family and legal team are appealing to other former workers in the area to help shed light on her death.

“We know that the manufacture of gas fires could involve the use of asbestos materials, and that workers who manufactured and installed them may have been directly exposed,” her lawyer, Isobel Lovett, told a British newspaper. Although the information may have some benefit to her family if they can show that the company’s negligence led to Whittaker’s mesothelioma, it came too late to give any support to her treatment.

Asbestos exposure that took place in youth or childhood can also be hard to trace. Several recent high-profile deaths, including actor Merlin Olson, have been traced to summer construction jobs during their teenage years. And every year, patients die of mesothelioma who were exposed to the toxic fibers on the work clothes of a spouse or parent who worked with asbestos containing products.

Exposure to asbestos can be one critical ingredient in diagnosing mesothelioma since no definitive diagnostic assay exists and symptoms can be similar to lung cancer or other lung diseases.
If you were diagnosed with mesothelioma and would like help in understanding how you were exposed to asbestos you should speak to a qualified mesothelioma lawyer.

Certain types of biomarkers can help doctors predict the best chemotherapy treatment for patients with malignant pleural mesothelioma. Researchers from Cairo University in Egypt looked at 91 mesothelioma patients. They tested two different chemotherapy drug combinations: pemetrexed plus cisplatin and gemcitabine plus cisplatin. FDA Approved Treatment Options Mesothelioma is a rare cancer caused by asbestos and standard therapies are limited. Most mesothelioma patients have chemotherapy as their first-line treatment. If they are healthy enough, they may also have surgery or radiation therapy. Chemotherapy is a group of toxic drugs that kill cells by damaging their DNA. As of this writing, the only FDA approved chemotherapy for malignant pleural mesothelioma is a combination of pemetrexed and cisplatin. Gemcitabine is not an … END_OF_DOCUMENT_TOKEN_TO_BE_REPLACED