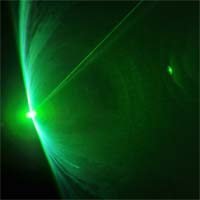 There is more evidence that Photodynamic Therapy may be a valuable adjuvant treatment for people undergoing mesothelioma surgery.

Photodynamic therapy (PDT) is a light-based cancer treatment that uses a sensitizing drug and a light to destroy cancer cells several millimeters into the targeted tissue. Although it is not yet widely used for mesothelioma, PDT is considered particularly suitable for tumors on the mesothelium, which tend to be wide but not very deep.

All of the patients studied had undergone a complete resection (surgical removal) of their cancer. Half of the patients were treated with a surgical technique called modified extrapleural pneumonectomy (MEPP). The other half had a less extensive surgery called radical pleurectomy (RP). Because of advances in surgical techniques during the study period, 13 of the last 16 patients underwent procedures that did not involve removal of a lung.

Both groups were treated after surgery with an interoperative dose of photodynamic therapy. The median survival for the MEPP group was 8.4 months following surgery and PDT. But, at 2.1 years after the follow-up began, the median had still not been reached for the RP/PDT group – a result that surprised even the researchers, especially given the advanced mesothelioma of most of the patients.

The researchers conclude that RP plus PDT is clearly superior to MEPP with PDT for mesothelioma patients. The University of Pennsylvania’s Abramson Cancer Center offers radical pleurectomy as a surgical alternative to the more extensive – and more risky – extrapleural pneumonectomy, which involves removal of the lung and other internal structures. The research team says RP plus PDT is a “reasonable option” for mesothelioma patients who need surgery and can serve as the “backbone” of a surgically-based multimodal treatment plan for the disease.

Malignant pleural mesothelioma is a rare type of cancer. A growing number of mesotheliomas are being treated with novel immunotherapies. But clinicians still lack a meaningful way to measure mesothelioma treatment response. An article in Seminars in Nuclear Medicine lists five ways clinicians can measure how well a treatment plan is working. And a new artificial intelligence tool can measure mesothelioma tumors without any human input. Artificial intelligence may provide the key to treatment response in the future. Measuring Mesothelioma Treatment Response In malignant pleural mesothelioma, complex tumors result in inconsistent clinical assessment. There are five common ways to measure if a treatment plan is working. Generally, a clinician will look to see if the size or weight of a tumor has … END_OF_DOCUMENT_TOKEN_TO_BE_REPLACED