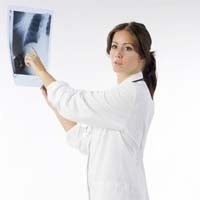 There is evidence that a new type of radiation therapy may have advantages over other methods for treating mesothelioma patients after surgery.

A marriage of spiral CT-scanning technology and intensity modulated radiation therapy (IMRT), helical tomotherapy offers enhanced precision and the ability to ‘sculpt’ the radiation dose to conform to the size and shape of the tumor being treated. Because mesothelioma tumors tend to be irregular in shape and spread out across the membranous mesothelial tissue, this sculpting ability may help doctors deliver just enough post-surgical radiation to kill remaining cancer cells without damaging large numbers of healthy cells.

In a recent study on the technology at the University of Paris, a group of French researchers analyzed the treatment outcomes of fourteen malignant pleural mesothelioma patients who had helical tomotherapy (HT), also called ‘helicoidal tomotherapy’, following extrapleural pneumonectomy (EPP) surgery. Half of the patients had received chemotherapy prior to their surgery. The study subjects were treated at the Curie Institute and the Rene Gauducheau Centre starting in August 2007.

The median radiation dose used in the surgical cavity was 50Gy delivered in 2Gy fractions. High dose areas received up to 57Gy in 2.16Gy fractions. Although two of the patients in the study experienced lung inflammation called radiation pneumonitis following HT, the treatment was reportedly “well tolerated” in most mesothelioma patients.

Six patients saw a return of their mesothelioma in an average of 5.1 months after HT treatment and three of those died shortly after relapsing. But most of the mesothelioma patients lived longer than expected; the median survival of all study participants was 18.4 months after initial diagnosis. Patients treated later in the study tended to fair better than those treated earlier, which the researchers attributed to a “learning curve” in the optimization of the dosing parameters.

HT is currently used to treat prostate, lung, brain, head and neck, bone and soft tissue cancers as well as lymphomas, multiple myelomas and some leukemias. Noting that there is little clinical data on the value of HT for mesothelioma, the French researchers conclude that the treatment is “a reliable, quite well tolerated, and efficient way of treating malignant pleural mesothelioma patients after an EPP.” The study was published in a French medical journal on respiratory illnesses.

Researchers in Iran tested the safety of a new version of the drug pemetrexed in patients with non-small cell lung cancer and malignant pleural mesothelioma. This drug is used to treat these patients when they are not able to get surgery for their cancer. The researchers were able to determine that pemetrexed is safe in patients with non-squamous non-small cell lung cancer. Treatment Choices Malignant pleural mesothelioma is a lung-related cancer like non-small cell lung cancer. It is caused by exposure to asbestos. Treatment for mesothelioma usually involves chemotherapy, radiation therapy, and surgery. Patients may receive more than one type of treatment. This is called multimodal therapy. Pemetrexed is a chemotherapy drug that interrupts the cell replication process that helps … END_OF_DOCUMENT_TOKEN_TO_BE_REPLACED