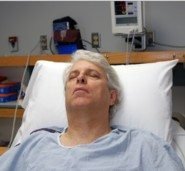 Incorporating chemotherapy in a regimen of symptom-relieving treatments (such as steroid medications) doesn’t significantly improve survival or quality of life in mesothelioma patients, according to a study published in the May 17 issue of The Lancet. However, one chemotherapy drug—vinorelbine—is promising enough to warrant further study, the authors say.

Because mesothelioma attacks the lining of the lung, it is one of the trickiest cancers to treat. Surgery is complicated because it requires either stripping the lung lining or removing the whole lung, radiation is risky because it can damage healthy lung tissue, and chemotherapy isn’t very effective against this type of cancer, says one of the lead study authors, Richard Stephens, a research scientist with the Medical Research Council Clinical Trials Unit in London, England.

When Stephens and colleagues designed this study back in the late 1990s, most treatments were aimed at simply controlling symptoms (an approach known as active symptom control, or ASC) with regular evaluations, palliative radiation, and steroid drugs. A variety of new chemotherapy drugs have been developed since then, yet even they haven’t shown much promise against the disease. “In mesothelioma even the most active drugs only result in tumor responses in about 20 percent of patients,” Stephens says.

As part of the continuing effort to find more effective treatments, Stephens and his colleagues investigated whether combining ASC with one of two different chemotherapy regimens might lengthen survival or improve symptoms. To that end, they recruited 409 mesothelioma patients (average age, 65) from treatment centers in the United Kingdom and Australia between 2001 and 2006. Some of the patients had been treated with surgery, but none had had previous chemotherapy.

When they analyzed the data, the researchers didn’t note any real symptom improvement in patients receiving chemotherapy as opposed to those getting ASC alone. There was, however, a small increase in survival in one of the chemotherapy groups. Patients taking ASC plus vinorelbine lived, on average, two months longer (9.5 months compared to 7.6 months) than those in the ASC group. The patients on vinorelbine also experienced a longer period without their cancer progressing.

Even though chemotherapy caused side effects, and it only offered a slight survival advantage, the results were still important considering that this is a disease for which there are currently very few treatment options, Stephens says. “Whilst the use of vinorelbine perhaps only extended survival by a couple of months, this is a start and we need to see how we can build on this.”

Future studies should identify which patients benefit most from treatment—and how much they benefit—so that doctors can better target treatments, Stephens says. Another research prerogative is to test out different drug combinations; for example, adding vinorelbine to other chemotherapy drugs, such as cisplatin or pemetrexed.

Though it did not yield overwhelmingly positive results, this study and others like it can help doctors and patients make better treatment decisions. “You cannot completely change things overnight with one trial,” Stephens says. “We have to learn and build on what we know, and by doing so eventually we can make progress.”

Five out of ten Korean oncologists surveyed feel positive about using an aerosolized chemotherapy system called PIPAC for mesothelioma and other types of cancer. PIPAC stands for pressurized intraperitoneal aerosol chemotherapy. The system turns liquid chemotherapy drugs into a spray that can be applied with a nebulizer. It was developed to treat surface malignancies like peritoneal mesothelioma that can be hard to treat with standard methods.  PIPAC can be used in conjunction with mesothelioma surgery or by itself as either a palliative or curative treatment.  The technology is still very new. Many doctors have never used it. But research conducted by the Seoul National University College of Medicine shows Korean doctors are ready to embrace it. How Spray-on Chemotherapy Works … END_OF_DOCUMENT_TOKEN_TO_BE_REPLACED