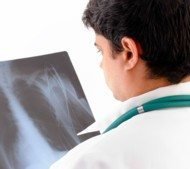 Mesothelioma is a cancer directly linked to asbestos exposure. Now researchers are discovering that the extent of that exposure can significantly affect how long a patient survives, and they’re finding that some people may be more susceptible to the effects of asbestos than others.

Of all the cancers, mesothelioma is among the most deadly—most patients survive for less than one year. Researchers have been trying to prolong patients’ lives, in part by learning more about the disease and how it progresses. Because the vast majority of mesothelioma cases can be attributed to asbestos exposure, knowing how that exposure contributes to disease progression is an important component of research.

“One crucial part of trying to advance our understanding of a serious disease like mesothelioma is discovering the factors that contribute to a poorer outcome,” explains Karl Kelsey, MD, professor of Community Health and Pathology and Laboratory Medicine at Brown University. Dr. Kelsey and his colleagues set out to determine how asbestos exposure might affect patient survival. “Since it is very difficult to assess asbestos exposure, the question that we were able to evaluate had never really been asked prior to our work.”

The researchers asked 128 patients with mesothelioma about their history of asbestos exposure. Then they looked at the number of asbestos particles in samples removed from the patients’ lungs and tumors during surgery.

This unusual finding suggests that certain people may be more susceptible to the effects of asbestos than others, and as a result may develop the disease after less exposure. “Although the mechanism for the unusual dose-response we observe is unclear, patients with a higher susceptibility to asbestos may suffer from a more aggressive form of disease that more closely resembles disease in patients with the highest exposure,” Dr. Kelsey says. More susceptible people may also develop mesothelioma at a younger age, he says.

The poorest outcome in the study was among men, who had the highest levels of asbestos fibers in their lungs, Dr. Kelsey and his colleagues reported in the June issue of Environmental Health Perspectives. This finding makes sense, considering that men have traditionally worked in industries with high asbestos exposure. Men in the study also faced worse odds of surviving the disease than women.

Currently doctors have no way of determining which people might be more susceptible to asbestos, although Dr. Kelsey’s lab is trying to discover the genes responsible for increased susceptibility.