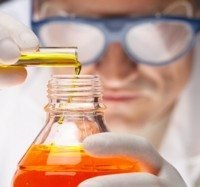 A test that looks at ratios of four genes can accurately predict which mesothelioma patients face the greatest chance of survival, and help pinpoint the best candidates for surgery, according to a study in the May 6 Journal of the National Cancer Institute.

Mesothelioma is one of the most challenging cancers to treat. Patients survive an average of just one year after their diagnosis. Surgery can help improve survival somewhat, but it does have risks. Knowing which patients are most likely to benefit from surgery can spare those with a poor outlook from having to undergo an unnecessary and invasive procedure.

To predict a patient’s prognosis, doctors typically look at cancer stage (how far it has spread), whether the tumor can be removed surgically, the appearance of cells under a microscope (histological subtype), and whether the cancer has spread to the lymph nodes. However, often it is not possible for doctors to determine these factors without subjecting patients to invasive procedures. “Usually you need major surgery to determine the stage which can help predict outcome,” says Raphael Bueno, MD, Associate Chief in the Division of Thoracic Surgery and Director of the Thoracic Surgery Residency Program at Brigham and Women’s Hospital in Boston, Massachusetts.

Dr. Bueno’s team is currently investigating a less invasive way to predict a mesothelioma patient’s prognosis, using a method that analyzes differences in genes expressed by the cancer. Although two gene-based methods are available for predicting breast cancer recurrence, the technology hasn’t been widely used, in part because the tests use large arrays including thousands of genes, and the results are difficult to replicate between laboratories.

Dr. Bueno’s team has developed a much simpler test that predicts patient outcomes based on the ratios of just four genes. They selected the four genes by comparing the genes of mesothelioma patients who had good outcomes (longer survival times) to those of patients who had poor outcomes.

The current study was designed to determine the accuracy of this test in predicting the survival of mesothelioma patients who were undergoing surgery. Researchers analyzed tissue samples taken prospectively from 120 mesothelioma patients, and then followed-up the patients until 2007 or until their death.

According to the authors, this minimally invasive test could be useful for mesothelioma patients who are considering surgery. “Patients whose gene ratio test results predict a good prognosis after surgery may more confidently select the treatment option that includes surgery,” the authors write. “Patients assigned to the predicted poor outcome group…could be counseled to forgo surgery, which would not benefit them, and to seek best supportive care.”

The researchers say they expect their gene test to improve survival among mesothelioma patients, preventing those who aren’t likely to benefit from surgery from having to undergo invasive procedures. However, further studies are needed to determine what effect this test will actually have on patient outcomes once it has been incorporated into the decision-making process.

A Canadian study found that tracking trends in mesothelioma at the local level can help officials predict future mesothelioma cases. Most mesothelioma tracking efforts focus on the national scale and monitor cases across a country or region. This study, published in Cancer Causes and Control, looked at mesothelioma cases based on industrial sources of asbestos in Ontario and British Columbia. Growing Number of Cases Asbestos is a toxic material that is used in many commercial and industrial products. It’s durability and heat resistance made it very popular in products like construction materials, textiles, and vehicles. Mesothelioma is a deadly cancer caused by exposure to asbestos. It was first identified as a cancer-causing material in 1977 by the International Agency for … END_OF_DOCUMENT_TOKEN_TO_BE_REPLACED