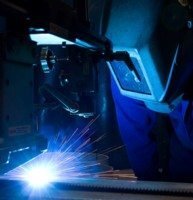 According to a new study from the Sheet Metal Occupational Health Institute Trust and Duke University, sheet metal workers are at increased risk for asbestos-related diseases.

Between 1986 and 2004, researchers followed 17,345 individuals with 20 or more years of experience in the sheet metal trade.  Information that was collected included smoking history, X-ray results and causes of death.  This data was than analyzed using statistical modeling.  The researchers found a “statistically significant excess mortality” for pleural cancers,mesothelioma, and asbestosis.  Increased lung cancer rates were also found and these rates appeared to be independent of smoking history.  The researchers concluded that there was an increased risk for asbestos-related diseases for sheet metal workers even among workers who were indirectly exposed to asbestos.

These results echo earlier studies including one published in 1985 in which an analysis of sheet metal workers who only had sporadic exposure to asbestos demonstrated a significant excess of cancer.  In this earlier study, cancers also appeared in the workers at sites associated with asbestos including mesothelioma.

A Canadian study found that tracking trends in mesothelioma at the local level can help officials predict future mesothelioma cases. Most mesothelioma tracking efforts focus on the national scale and monitor cases across a country or region. This study, published in Cancer Causes and Control, looked at mesothelioma cases based on industrial sources of asbestos in Ontario and British Columbia. Growing Number of Cases Asbestos is a toxic material that is used in many commercial and industrial products. It’s durability and heat resistance made it very popular in products like construction materials, textiles, and vehicles. Mesothelioma is a deadly cancer caused by exposure to asbestos. It was first identified as a cancer-causing material in 1977 by the International Agency for … END_OF_DOCUMENT_TOKEN_TO_BE_REPLACED