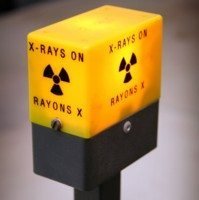 Mesothelioma patients in the United Kingdom commonly receive radiation to prevent the cancer from spreading after open chest surgical procedures, even though the benefit of this practice has not yet been confirmed. Many doctors would like to have a more comprehensive clinical study performed on the use of preventive radiation, according to a review published in the July issue of the journal, Lung Cancer.

Patients with mesothelioma often have fluid build-up in the space around the lungs (pleural effusion). To remove this fluid, doctors must open up the chest and drain it. However, during this and other invasive procedures such as biopsies and thoracoscopies (examination of the inside of the chest), the cancer can spread along the tracts made by chest surgery and form skin nodules (growths).

To prevent this cancer spread, it has become common practice in the United Kingdom to administer radiation at the site of intervention—called prophylactic irradiation of tracts (PIT)—even though only small trials have been done to confirm the benefits. Researchers at Christie Hospital NHS Trust in Manchester, England wanted to determine the actual risk of cancer spread after interventions such as chest drains, biopsies, and thoracoscopies, and whether PIT is effective at reducing this risk.

The researchers performed a review of published studies on the use of PIT in mesothelioma. The available studies reported that the risk of cancer spread after a chest procedure ranged between 0% and 48% when PIT was not performed. However, these results may not have been entirely accurate, because the three randomized-controlled studies that were performed were small and had conflicting results. One larger study done in 1995 found a 40% higher incidence of cancer spread along the tracts in patients who did not have PIT. However, the advent of image-guided needle biopsies and palliative chemotherapy may have reduced the incidence of cancer spread after chest procedures since this study was performed. A more recent study on the subject did not find the same benefit to using PIT.

Current health guidelines on the use of PIT also are inconsistent, say the authors. Although both the British Thoracic Society and French Speaking Society for Chest Medicine recommend the use of this technique to prevent tumor spread following an open procedure, their guidelines were published before the latest research on PIT was released.

The authors say that a new, randomized-controlled study enrolling a larger number of patients is needed to confirm whether there actually is a benefit to PIT, before putting patients through a potentially unnecessary radiation treatment. “PIT can have side effects if the field of irradiation is large,” explains lead author Corinne Faivre-Finn, FRCR, MD, PhD, a researcher in the Department of Clinical Oncology at Christie Hospital NHS Trust. “It is also a waste of resources for the National Health Service (NHS) to deliver a treatment that may have no benefit for the patients.”

Doctors at many cancer centers in the UK agree. As part of the study, the researchers sent a questionnaire to specialists at 54 cancer centers. Of those who responded, 75% said they offered PIT. Those who offered the procedure did so based on early studies and recommendations from the British Thoracic Society. Twenty-eight of the centers felt that there is a need for a new, nationwide randomized-controlled trial to investigate the use of PIT.

The review authors recommend undertaking a new study that follows patients for a minimum of 12 months, and includes patients receiving palliative chemotherapy, which has been shown to increase mesothelioma survival. They say the study also should take into account patients’ quality of life after PIT.

“One of the findings from our survey of PIT in the UK was the variation in practice across the country, not only in the use of PIT but also in dose and radiotherapy technique. Hundreds of patients are treated with PIT each year in the UK without strong evidence of the benefit of this treatment,” Dr. Faivre-Finn says. “There is currently a need for high quality randomized-controlled trials in mesothelioma to help shape and standardize practice in the UK.”

An international group of researchers have provided recommendations for countries to create a mesothelioma registry. Mesothelioma registries are great tools to monitor the negative effects of asbestos. It can help to identify clusters of asbestos exposure. Registries can also track the impact of asbestos reduction programs. Asbestos Health Risks Asbestos is a naturally occurring mineral that has been found throughout the world. Even though it is toxic, it is used in manufacturing and construction in many countries around the world. Mesothelioma is a cancer that is caused by exposure to asbestos. It grows in the lining of organs like the lungs. Generally, those who develop mesothelioma show no signs of illness for a long time after their first exposure. It … END_OF_DOCUMENT_TOKEN_TO_BE_REPLACED