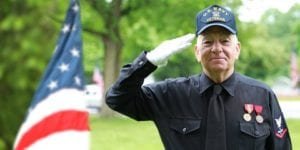 A new study offers a sobering reminder of the mesothelioma risk among Navy veterans.

Researchers at Vanderbilt University compared mesothelioma deaths among 114,000 veterans. These veterans were involved in nuclear testing during the Cold War. They referred to these service members as “atomic veterans”.

Between 1945 and 1962, the US conducted 230 above-ground nuclear tests. Some of the tests took place in the Nevada desert while others were in the Pacific ocean.

In a new study in the International Journal of Radiation Biology, researchers found a high mesothelioma risk among Navy veterans. They determined that it was much higher than it was in the other atomic veterans studied.

More than 250,000 military personnel took part in the Cold War nuclear tests. The Vanderbilt researchers singled out 114,000 radiation exposed veterans to focus on.

Then, the team looked at what jobs were most likely to expose these soldiers to asbestos. Asbestos is the primary cause of malignant mesothelioma.

“We were able to categorize specific jobs into potential for asbestos exposure based on a detailed database of the military activities of the atomic veterans, developed using historical records provided by the Defense Threat Reduction Agency,” explains the report.

The report determined that 20 percent of the atomic veterans worked in jobs that had a “high potential” for asbestos exposure.

Even so, 55 percent of the mesothelioma deaths occurred only among sailors with these jobs. Their high-risk jobs included machinist’s mate, pipe fitter, boiler technician, water tender and firefighter.

Why is There a Higher Risk for Mesothelioma Among Navy Veterans?

During World War II, the Korean War and the Vietnam War, the military used a lot of asbestos. Most US military ships, planes and vehicles used various types of asbestos-containing products.

Many airplanes had fire-resistant asbestos in their cabins. It was also used in the transmissions, clutches and brakes of vehicles, and throughout ships. Some Navy veterans remember sleeping in bunks that were inches away from asbestos-wrapped pipes.

“The significantly higher mortality rate overall was explained by asbestos exposure among enlisted naval personnel in this low-dose radiation exposed cohort,” conclude the authors of the new report.

When asbestos is swallowed or inhaled, it can cause mesothelioma symptoms even decades later. Often, sailors who were exposed to asbestos when they were young do not develop mesothelioma until they are seniors.

Researchers in Italy say a virus normally found in goats could offer a new, safer way to kill malignant mesothelioma cells and improve patient outcomes.  The virus is caprine herpesvirus 1 (CpHV-1). It has been blamed for bouts of spontaneous abortions in goat herds. But it does not appear to cause any disease in humans. In fact, previous studies show CpHV-1 can kill several types of human cancer cells.  The newest study of CpHV-1 was conducted at the National Cancer Institute IRCCS G. Pascale Foundation in Naples. Scientists there made two important discoveries. They found that not only can CpHV-1 kill mesothelioma cells without harming normal cells, but it might also have the potential to make chemotherapy work better.  Mesothelioma … END_OF_DOCUMENT_TOKEN_TO_BE_REPLACED