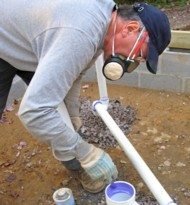 Doctors have long known that asbestos exposure in the workplace significantly increases the risk for mesothelioma, but now they’ve discovered that even workers who have had relatively low exposure to asbestos are at increased risk for this deadly cancer, according to a study in the Journal of Occupational and Environmental Medicine. The study also suggests that the man-made fibers often used to replace asbestos in manufacturing may also be increasing workers’ mesothelioma risk.

Most asbestos cases including mesothelioma have been linked to occupational asbestos exposure, and particularly from exposure to the amphibole type of asbestos. Still uncertain is the risk from man-made vitreous fibers (MMVF), which are often used as a substitute for asbestos. MMVFs are similar in structure to asbestos, and some researchers have theorized that they also can cause cancer, but there hasn’t been enough research done to confirm this potential risk.

“Research into the environmental or occupational causes of cancer is difficult to conduct, for various reasons, and there are too few qualified researchers in the entire area of environmental causes of disease,” explains study author Jack Siemiatycki, PhD, Professor at the University of Montreal in Canada. “While many people think that there are armies of researchers investigating such questions, in fact there are only a small number throughout the world, for all environmental chemicals combined. Thus, even though asbestos is the most-studied occupational carcinogen, there still remain unanswered questions about how and under what conditions the different forms of asbestos can cause cancer (such as mesothelioma), and whether MMVF is equally dangerous.”

In the 1980s and 1990s, Professor Siemiatycki and his colleagues launched two studies examining the link between occupational exposures and cancers such as mesothelioma. In these studies, mesothelioma patients were asked about their lifestyle and work histories. Their health and occupational histories were matched with those of healthy controls and other cancer patients. A team of experts then reviewed the responses and compiled a list of potential occupational exposures, including asbestos and MMVF.

The authors discovered a significantly increased risk of mesothelioma among participants who had occupational exposure to asbestos, and particularly among those who were exposed to the amphibole form of asbestos. However, even workers with nonsubstantial exposure were at higher risk for mesothelioma, which hadn’t been found in previous studies. This discovery suggests that more needs to be done to protect workers from on-the-job asbestos exposures. “As with any other potentially harmful exposure, workers’ exposures should be minimized to the extent that technology and finances permit,” Professor Siemiatycki says.

Another unexpected finding of the study was that participants who were exposed to both asbestos and MMVF were at higher risk for mesothelioma than those exposed to asbestos alone. This suggests that the two substances might work synergistically to increase mesothelioma risk, although the authors say more research is needed to confirm this theory.

“Because of the increasing use of and exposure to MMVF, and the lingering exposure to asbestos, it is important to pursue research to better understand how exposure to these various fibers, alone and in combination act to influence risk of mesothelioma,” the authors wrote.

Malignant pleural mesothelioma is a rare type of cancer. A growing number of mesotheliomas are being treated with novel immunotherapies. But clinicians still lack a meaningful way to measure mesothelioma treatment response. An article in Seminars in Nuclear Medicine lists five ways clinicians can measure how well a treatment plan is working. And a new artificial intelligence tool can measure mesothelioma tumors without any human input. Artificial intelligence may provide the key to treatment response in the future. Measuring Mesothelioma Treatment Response In malignant pleural mesothelioma, complex tumors result in inconsistent clinical assessment. There are five common ways to measure if a treatment plan is working. Generally, a clinician will look to see if the size or weight of a tumor has … END_OF_DOCUMENT_TOKEN_TO_BE_REPLACED