Home / News / Mesothelioma Study Could Lead to Drug for Prevention 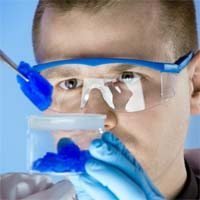 Asbestos exposure is the biggest risk factor for the development of malignant mesothelioma, a rare but aggressive cancer that usually carries a poor prognosis.  The numbers of mesothelioma patients is rising as more people pay the price for years of asbestos exposure.  While researchers around the world search for more effective treatments, a group of scientists in Italy have discovered information that may eventually be used not only to treat but to prevent mesothelioma in high risk patients.

Researchers in the Department of Clinical and Experimental Medicine at the University of Ferrara are studying the presence of adenosine receptors (ARs) in the pleura, or lung lining, of patients with and without malignant mesothelioma.   Adenosine receptors are involved in processes such as inflammation and immune responses.  To understand the interaction between adenosine, a structural component of all cells, and malignant mesothelioma, the team studied the presence and functionality of ARs in both types of cell samples.

Scientists know that adenosine plays a key role in the inflammation of cells and is involved in the regulation of cell death and proliferation.  This is significant because, earlier this year, researchers confirmed that malignant mesothelioma may result from cellular inflammation brought on by asbestos exposure.

Though these research findings are far from a ‘cure’ for mesothelioma, they could lead drug companies toward more effective medicines than are currently available. Writing in the American Journal of Respiratory Critical Care Medicine, the researchers conclude “These new finding suggest that A3AR could represent a pharmacological target to prevent tumor development after asbestos exposure and to treat full blown malignant mesothelioma.”

Although there is currently no drug for preventing the development of mesothelioma in people who have been exposed to asbestos, several studies have also linked Vitamin A with a lower risk of developing the disease.  Like ARs, Vitamin A plays a role in the regulation of cell growth and division.

Researchers in Iran tested the safety of a new version of the drug pemetrexed in patients with non-small cell lung cancer and malignant pleural mesothelioma. This drug is used to treat these patients when they are not able to get surgery for their cancer. The researchers were able to determine that pemetrexed is safe in patients with non-squamous non-small cell lung cancer. Treatment Choices Malignant pleural mesothelioma is a lung-related cancer like non-small cell lung cancer. It is caused by exposure to asbestos. Treatment for mesothelioma usually involves chemotherapy, radiation therapy, and surgery. Patients may receive more than one type of treatment. This is called multimodal therapy. Pemetrexed is a chemotherapy drug that interrupts the cell replication process that helps … END_OF_DOCUMENT_TOKEN_TO_BE_REPLACED