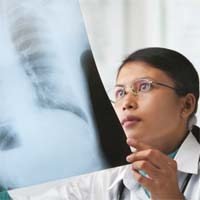 A method for targeted delivery of radiotherapy may be safer than conventional radiotherapy for slowing the spread of malignant pleural mesothelioma in patients who have had surgery.

Mesothelioma is a virulent cancer caused by exposure to asbestos. Although it can take up to 40 year to develop, when it does, it often spreads quickly across the mesothelium which surrounds the lungs. For most patients, prognosis is poor unless the spread of mesothelioma can be slowed down or stopped. Some patients undergo a surgical procedure called pleurectomy/decortication to remove the diseased pleural lining and as much of the cancerous tissue as possible from the lungs or chest wall.

The concern following any cancer surgery is that the cancer can re-grow from cells that were left behind. Radiotherapy can reduce the risk of this happening, but radiation is difficult to deliver to patients with mesothelioma because the malignant tissue lies close to vital organs like the lungs. A mesothelioma patient with one diseased lung cannot run the risk of damaging the remaining healthy lung with radiation.

To get around this risk, mesothelioma experts in Italy are testing a radiation delivery method called tomotherapy. With tomotherapy, radiation is delivered to the target area slice by slice, rather than to the entire tumor at one time. Because it is more precise and targeted, the method makes it easier to prevent radiation from effecting nearby healthy tissues.

The good news is that none of the patients died as a result of the tomotherapy treatment.  However, during a median follow-up of 19 months, 5 patients developed pneumonitis, a severe respiratory problem. One other patient experienced severe chest wall pain and another suffered severe thrombocytopenia, a decrease in blood platelets. Additional studies will be needed to determine whether or not tomotherapy can extend the lives of mesothelioma patients.

An international group of researchers have provided recommendations for countries to create a mesothelioma registry. Mesothelioma registries are great tools to monitor the negative effects of asbestos. It can help to identify clusters of asbestos exposure. Registries can also track the impact of asbestos reduction programs. Asbestos Health Risks Asbestos is a naturally occurring mineral that has been found throughout the world. Even though it is toxic, it is used in manufacturing and construction in many countries around the world. Mesothelioma is a cancer that is caused by exposure to asbestos. It grows in the lining of organs like the lungs. Generally, those who develop mesothelioma show no signs of illness for a long time after their first exposure. It … END_OF_DOCUMENT_TOKEN_TO_BE_REPLACED