Home / News / Should the Treatment for Mesothelioma be Individualized? A Frog’s Tale 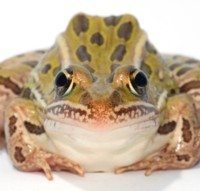 Onconase®, a new type of cancer drug was tested in malignant mesothelioma patients whose tumors were inoperable. Results were not better than standard therapy although a minority of patients reportedly received a great benefit. The FDA has demanded a further clinical trial and now the future of this drug as a potential mesothelioma therapy may be in jeopardy. This story is not unusual, but it highlights the flaws in the drug approval process for mesothelioma and other cancers.

Getting a new cancer drug to market is exceedingly expensive (hundreds of millions of dollars) and can take many years. While criticisms of the approval process have focused on its cost in time and money there has been little critique about one fundamental flaw – the false assumption that all cancer patients are the same. The story of Alfacell’s Onconase is illustrative in this respect.

Onconase is a natural protein isolated from the leopard frog that has been shown in the laboratory and clinic to target cancer cells including mesothelioma. The protein spares normal cells by triggering apoptosis (programmed cell death) via multiple molecular mechanisms of action. Onconase is based on Alfacell’s proprietary ribonuclease technology.

In 2002, Alfacell published the results of its phase II trial that involved 105 patients with inoperable malignant mesothelioma. Twenty-one patients developed grade 3 or 4 adverse events that were related to the treatment and sixteen patents were removed from the study because of these side effects. There were no toxic deaths. This type of safety profile compares favorably with chemotherapy. The overall median survival was 6 months. This number is less than 12.1 months for alimta and cisplatin, the current standard of care. When Alfacell stratified their results based on a subset of prognostic groups, patients with a better performance status had a median survival of 8.3 months. Preliminary results of a phase III trial reported a median survival of 11.3 months in patients with the better performance status. Then a phase IIIb clinical trial was performed that combined Onconase with the chemo drug doxorubicin and compared it to doxorubicin alone. The median survival for mesothelioma patients who received the two drugs was 11.1 months compared to 10.7 months for patients who only received doxorubicin.

Based on these results, the FDA determined that Onconase did not meet statistical significance for the primary endpoint of survival in these mesothelioma patients, but had demonstrated a statistically significant improvement in survival for patients who failed a prior chemotherapy regimen. The FDA recommended that Alfacell conduct an additional trial in mesothelioma that focused on Onconase as a second line treatment (for mesothelioma patients whose cancer grew while on a prior chemo regimen). While this leaves the door open for Onconase to be approved as a second line treatment there is a lost opportunity for patients who may have benefited from receiving the drug as a first line therapy.

Although the clinical trials did not demonstrate a statistically significant improvement versus standard therapies, some individual patients did receive a clear benefit. For example, in the phase II study there were ten patients out of the 105 individuals with inoperable mesothelioma who remained alive 15.2+ to 54.8+ months from Onconase treatment. And one of these patients has continued treatment for more than 3 years and has been in remission for most of that time. According to published reports, patients with untreated malignant mesothelioma have a life expectancy of less than a year. Apparently ten patients beat the odds by taking this experimental therapy. This result should be acknowledged as significant and not averaged into oblivion.

The orthodox paradigm is that efficacy should be measured by adding together all patients involved in a clinical trial to determine whether there is statistically significant improvement. However, this presupposes that all patients are the same and they are not. Furthermore, patients have an individualized perspective. For a patient with inoperable malignant mesothelioma or any other cancer the question is not whether the group benefited. The question is whether I will benefit. This discreet perspective requires a paradigm that treatment is a unique process where the practitioner devises an individualized therapy plan based on the patient’s specific biology, disease, goals, and needs. Because a therapy like Onconase has a less toxic safety profile than most chemotherapy and has worked in some patients an appropriate line of investigation should be why it worked in this subgroup and to identify with as much specificity as possible the criteria that define that group.

Some cancer treatments work in some patients because all patients are not the same. According to the FDA if a drug works by creating a temporary reduction in the size of the tumor – “a response” – it is “active.” If the median survival is statistically better than the standard of care then it is worthy of consideration for approval. But, what if a drug has an overall median survival less than the current standard, but saves the lives of 5% of the patients tested? Shouldn’t the drug be approved for that subgroup of patients if what defines that group can be identified?

How many treatments for mesothelioma and other cancers have been rejected because studies did not demonstrate a statistically significant improvement for the entire group of patients? Probably hundreds. But, what if cancer is an individual disease and some treatments help some patients and have no effect on others? What if the “silver bullet” is really an individualized approach? If that is the case, therapies like Onconase and others should be available to patients that would benefit once research is directed towards identifying that sub-population.

Malignant pleural mesothelioma is a rare type of cancer. A growing number of mesotheliomas are being treated with novel immunotherapies. But clinicians still lack a meaningful way to measure mesothelioma treatment response. An article in Seminars in Nuclear Medicine lists five ways clinicians can measure how well a treatment plan is working. And a new artificial intelligence tool can measure mesothelioma tumors without any human input. Artificial intelligence may provide the key to treatment response in the future. Measuring Mesothelioma Treatment Response In malignant pleural mesothelioma, complex tumors result in inconsistent clinical assessment. There are five common ways to measure if a treatment plan is working. Generally, a clinician will look to see if the size or weight of a tumor has … END_OF_DOCUMENT_TOKEN_TO_BE_REPLACED