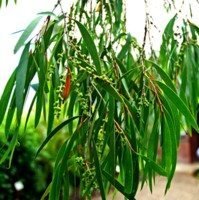 A recent study has suggested that tea tree oil can kill mouse mesothelioma cells in vitro. This indicates its potential usefulness in human mesothelioma, but more research is needed.

Tea tree oil comes from the leaves of Melaleuca alternifolia, a tree in the myrtle family that is found in Australia. The tree oil has been traditionally used as a topical anti-fungal and antibiotic. Laboratory studies have demonstrated that the compound that is most likely responsible for the oil’s antiseptic properties is called “terpinen-4-ol.”

In this study, researchers at the School of Biomedical, Biomolecular and Chemical Sciences at The University of Western Australia examined the in vitro anticancer activity of Melaleuca alternifolia (tea tree) oil and terpinen-4-ol. They tested the substances against an aggressive mouse mesothelioma tumor cell line and one for melanoma.

Necrosis is the premature death of cells caused by external factors, such as infection, toxins, or trauma. In contrast, apoptosis is a naturally occurring cause of cellular death. Apparently, both mechanisms were at work when the tea tree oil and terpinen-4-ol were introduced into the mesothelioma and melanoma cell lines.

The researchers also discovered that doses of the compounds that could kill the tumor cells were “significantly less efficacious” against non-tumor fibroblast cells. In other words, the compounds had a tendency to leave healthy cells intact.

The researchers concluded that their results demonstrate the potential anticancer activity of tea tree oil and terpinen-4-ol and that more research was needed.

If you are interested in using tea tree oil and/or terpinen-4-ol you should work with a licensed clinician. Please note that tea tree oil should not be used orally because there are reports of toxicity after consuming it by mouth. Also, when applied to the skin, tea tree oil is reported to be mildly irritating and has been associated with the development of allergic contact dermatitis in some people.

Five out of ten Korean oncologists surveyed feel positive about using an aerosolized chemotherapy system called PIPAC for mesothelioma and other types of cancer. PIPAC stands for pressurized intraperitoneal aerosol chemotherapy. The system turns liquid chemotherapy drugs into a spray that can be applied with a nebulizer. It was developed to treat surface malignancies like peritoneal mesothelioma that can be hard to treat with standard methods.  PIPAC can be used in conjunction with mesothelioma surgery or by itself as either a palliative or curative treatment.  The technology is still very new. Many doctors have never used it. But research conducted by the Seoul National University College of Medicine shows Korean doctors are ready to embrace it. How Spray-on Chemotherapy Works … END_OF_DOCUMENT_TOKEN_TO_BE_REPLACED