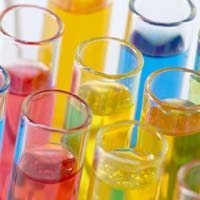 A team of biotech scientists in New York have developed an electrochemical process they say can help clinicians detect mesothelioma cells in blood serum. The system works by detecting a protein (HAPLN1) known to be expressed at high levels in the blood serum of people with malignant pleural mesothelioma.

Detecting mesothelioma as early as possible is of critical importance because mesothelioma is such a difficult cancer to treat. Associated with asbestos exposure, mesothelioma starts on the membrane around the lungs, heart, or abdomen. It typically grows quickly and does not respond to conventional treatments like chemotherapy or radiotherapy. Biomarkers like the HAPLN1 protein may be value if they can help clinicians distinguish mesothelioma from other conditions with similar symptoms.

The scientists first tested the electrochemical surface-imprinting system using a protein from cows called Bovine serum albumin (BSA), which is molecularly similar to HAPLN1.  Although the process did detect the BSA, its effectiveness was influenced by several factors, including the concentration of protein in the sample, the size of the electrode, and the amount of time the sample was allowed to incubate. When they were satisfied that the biodetection system had been optimized using the BSA, the research team tried it with HAPLN1 with good results.

“Molecular Imprinting based biosensor was successfully built to recognize malignant pleural mesothelioma cancer biomarker HAPLN1 and demonstrated high sensitivity by detecting low concentration of biomarker in serum/buffer solution,” they reported in the online journal PLoS One. The sensor was able to detect the presence of HAPLN1 and identify mesothelioma in 2 to 5 minutes. The scientists report that the process is inexpensive and the sensor as simple to use as a pH test.

A Canadian study found that tracking trends in mesothelioma at the local level can help officials predict future mesothelioma cases. Most mesothelioma tracking efforts focus on the national scale and monitor cases across a country or region. This study, published in Cancer Causes and Control, looked at mesothelioma cases based on industrial sources of asbestos in Ontario and British Columbia. Growing Number of Cases Asbestos is a toxic material that is used in many commercial and industrial products. It’s durability and heat resistance made it very popular in products like construction materials, textiles, and vehicles. Mesothelioma is a deadly cancer caused by exposure to asbestos. It was first identified as a cancer-causing material in 1977 by the International Agency for … END_OF_DOCUMENT_TOKEN_TO_BE_REPLACED