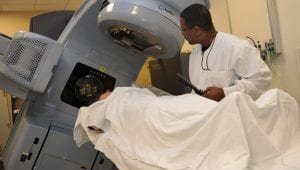 Researchers at one of the nation’s top cancer institutes are betting on a combination of radiation and immunotherapy in the continued pursuit of better treatments for malignant mesothelioma.

The new trial is based on the idea that radiation may boost the immune system’s anti-mesothelioma response and that avelumab may enhance the effect.

“The combination of radiation therapy and immunotherapy may be more effective against mesothelioma than either treatment alone,” writes lead researcher and radiation oncologist Andreas Rimner, MD, in a summary of the new study.

The first component of the proposed combination mesothelioma treatment is stereotactic body radiotherapy or SBRT. SBRT delivers high-dose radiation therapy to a very targeted area through a series of one to five treatments. Participants in the new trial will received five SBRT treatments.

Conventional radiation therapy is not as accurate as SBRT, which means the dose must be lower to avoid damaging healthy surrounding tissue. As a result, the mesothelioma tumor does not absorb as much radiation, which limits the effectiveness of the treatment.

Immunotherapy is widely believed to be one of the most promising new approaches to cancer treatment and it is currently the subject of multiple mesothelioma studies around the world. Avelumab alone is the focus of dozens of cancer trials.

Avelumab (Bavencio) works by blocking a protein on tumor cells called PD-L1. PD-L1 is one of the primary mechanisms mesothelioma cells use to avoid detection by the immune system.

The idea behind this and other immunotherapy trials is that blocking this protein can improve the body’s ability to naturally fight off cancer. Other PD-L1 blockers include pembrolizumab (Keytruda) and nivolumab (Opdivo).

The new Memorial Sloan Kettering study is the first study to combine avelumab with SBRT, but it is not the first to combine immunotherapy and radiation in the treatment of mesothelioma.

Last spring, researchers at the University of Pennsylvania published a review of the few existing studies on this emerging multimodal mesothelioma therapy for an article in Translational Lung Cancer Research.

“Radiation therapy may itself be immunomodulatory,” wrote Dr. Evan W. Alley of the Hematology and Oncology Division at Penn Presbyterian Medical Center, noting that radiotherapy has been shown to activate cancer-fighting cells.“The combination of immunotherapy and radiation therapy may allow for complimentary immunologic effects that can enhance antitumor response.”

A mesothelioma patient may be eligible for the Memorial Sloan Kettering trial if he or she has recurrent or persistent malignant pleural mesothelioma or peritoneal mesothelioma that continued to grow or came back after standard mesothelioma chemotherapy. Patients must be over 18, must not be suffering from any serious treatment side effects, and cannot have had previous immunotherapy.

An international group of researchers have provided recommendations for countries to create a mesothelioma registry. Mesothelioma registries are great tools to monitor the negative effects of asbestos. It can help to identify clusters of asbestos exposure. Registries can also track the impact of asbestos reduction programs. Asbestos Health Risks Asbestos is a naturally occurring mineral that has been found throughout the world. Even though it is toxic, it is used in manufacturing and construction in many countries around the world. Mesothelioma is a cancer that is caused by exposure to asbestos. It grows in the lining of organs like the lungs. Generally, those who develop mesothelioma show no signs of illness for a long time after their first exposure. It … END_OF_DOCUMENT_TOKEN_TO_BE_REPLACED