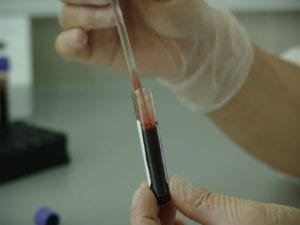 A new Japanese study is calling into question the value of a common prognostic test for people with malignant pleural mesothelioma.

The test is called the neutrophil-to-lymphocyte ratio or NLR and it is used in many types of diseases, including mesothelioma, as a marker for inflammation.

But in a new report published in the journal In Vivo, researchers with the Hyogo Prefectural Amagasaki General Medical Center say they found no relationship between NLR and overall survival in 143 mesothelioma patients.

Instead, the scientists found that a different inflammation marker called C-reactive protein-to-albumin ratio (CAR) was a much better predictor of overall mesothelioma survival.

How Does NLR Relate to Mesothelioma?

The NLR is calculated by dividing the number of neutrophils in a blood sample by the number of lymphocytes. In patients with cardiovascular disease and in those with several types of cancer, an elevated NLR has been associated with a worse prognosis.

CAR as a Predictor of Mesothelioma Survival

But after running multiple analyses on the medical records of 143 patients with inoperable mesothelioma who were diagnosed at their hospital between 2007 and 2017, the Japanese team concluded that “NLR was not associated with overall survival in any of the analyses.”

At the same time, the researchers found that, when subjected to multivariate analysis (where multiple variables are plugged into the calculation), an elevated level of CAR before the start of mesothelioma treatment “was an independent factor associated with worse overall survival.”

The team concludes that CAR appears to be a reliable prognostic factor in patients with inoperable pleural mesothelioma.

The Value of Prognostic Tests for Mesothelioma

Prognostic blood tests like NLR and CAR offer a simple and effective way to predict treatment response and to support mesothelioma patients and families in making informed decisions about their care.

Although the new study is not large enough to justify doing away with NLR as a prognostic tool for mesothelioma, it does suggest that adding CAR testing could potentially improve prognostic accuracy.

Other biomarkers for predicting mesothelioma survival or treatment response include c-MET expression (associated with blood vessel formation for the tumor), ki-67 ratios (associated with cancer cell proliferation), and levels of a protein called fibulin-3.

Around 2,500 Americans are diagnosed with one of the three primary types of mesothelioma each year, in spite of the EPA’s heavy regulation of asbestos. Although most mesothelioma patients do not survive longer than a year after diagnosis, some, like Australian Paul Kraus, have experienced long term mesothelioma survival.

Researchers in Iran tested the safety of a new version of the drug pemetrexed in patients with non-small cell lung cancer and malignant pleural mesothelioma. This drug is used to treat these patients when they are not able to get surgery for their cancer. The researchers were able to determine that pemetrexed is safe in patients with non-squamous non-small cell lung cancer. Treatment Choices Malignant pleural mesothelioma is a lung-related cancer like non-small cell lung cancer. It is caused by exposure to asbestos. Treatment for mesothelioma usually involves chemotherapy, radiation therapy, and surgery. Patients may receive more than one type of treatment. This is called multimodal therapy. Pemetrexed is a chemotherapy drug that interrupts the cell replication process that helps … END_OF_DOCUMENT_TOKEN_TO_BE_REPLACED