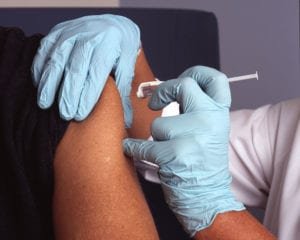 Researchers at Stanford University are about to move into human trials of what some believe may be the most promising treatment yet for malignant mesothelioma and other types of solid tumors.

The new treatment is an immunotherapy vaccine that combines two separate agents, both of which are already being tested independently.

Unlike some other types of immunotherapy – including drugs like Keytruda and Opdivo that have been tested for mesothelioma treatment – the new treatment is not customized to attack a specific type of cancer cell.

Instead, it relies on a two-part system that “teaches” immune system T-cells what kind of cells to attack by injecting the vaccine directly into a tumor. This is known as “in situ” (at the site) vaccination.

When Stanford scientists tested the vaccine in mice that had been given two of the same kind of tumor, the tumor that was not injected responded to the treatment just like the one that was injected.

“Immunoenhancing agents are injected locally into one site of tumor, thereby triggering a T cell immune response locally that then attacks cancer throughout the body.,” explains Ronald Levy, MD, senior author on the paper published in Science Translational Findings.

When it is injected into just one of the tumors, the vaccine seems to trigger an immune response which is specific to the antigens of the injected tumor.

The exciting news for patients with malignant mesothelioma and their families is that this vaccine has already been tested on multiple types of cancer in mice including breast, colon, and melanoma.

In tests on 90 mice. 87 of them were cured completed and two of the remaining three improved after a second injection.

In a statement, Dr. Levy says he envisions the vaccine being used in solid tumors (such as pleural mesothelioma) prior to surgery as a way to prevent new tumors from forming afterward.

It could also potentially be used to destroy any residual mesothelioma cells left behind after surgery.

Can Mesothelioma Patients Use the Vaccine?

The only requirement for this treatment to be used is that a person must have an injectable tumor site somewhere in the body.

The research team is now developing human trials and plans to test the vaccine in about 15 patients with non-Hodgkin’s lymphoma. If that trial goes well, a second trial could happen later in the year.

Dr. Levy anticipates that the treatment is likely to be less expensive than other immunotherapies and could be available for clinical use in one to two years.

Researchers in Iran tested the safety of a new version of the drug pemetrexed in patients with non-small cell lung cancer and malignant pleural mesothelioma. This drug is used to treat these patients when they are not able to get surgery for their cancer. The researchers were able to determine that pemetrexed is safe in patients with non-squamous non-small cell lung cancer. Treatment Choices Malignant pleural mesothelioma is a lung-related cancer like non-small cell lung cancer. It is caused by exposure to asbestos. Treatment for mesothelioma usually involves chemotherapy, radiation therapy, and surgery. Patients may receive more than one type of treatment. This is called multimodal therapy. Pemetrexed is a chemotherapy drug that interrupts the cell replication process that helps … END_OF_DOCUMENT_TOKEN_TO_BE_REPLACED