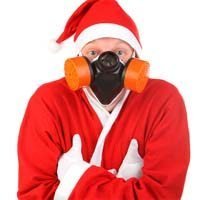 Christmas decorations stored in the attic could carry a hidden health risk of mesothelioma and other asbestos caused diseases for millions of American homes.

An estimated 35 million older homes are insulated with a vermiculite insulation sold under the brand name Zonolite. But the vermiculite mined by the W.R. Grace Company to produce Zonolite has been found to also contain fibers of asbestos, a naturally-occurring mineral that has been linked to such deadly diseases as asbestosis, lung cancer and mesothelioma.

The EPA says Zonolite insulation is unlikely to pose a health risk when left undisturbed.  But inhaling the insulation dust accidently transported from the attic on Christmas decorations, wreaths, artificial trees or lights could put residents at serious risk including causing or contributing asbestos caused diseases such as mesothelioma.  A recent AOL News report warns that children may be at greatest risk from such exposure because they are more likely to play with the décor, have higher breathing rates, and have more time for lodged asbestos fibers to cause illness during their lifetime.

Speaking to AOL, former EPA toxicologist Chris Weis, now a senior toxicologist for the National Institute for Environmental Health Sciences, said Zonolite was sold nationwide. “There are millions… of homes in the United States probably contaminated with this [lethal] material. The inventories show it was pretty much distributed from coast to coast, most heavily across the tier of Northern states – New England, the upper Midwest and the Northwest — and in all likelihood, it’s still there.”

Although Zonolite insulation has not been sold for years, the longer it remains in homes, the greater the likelihood that it will become brittle and produce dust as it degrades.

In most cases, Christmas decorations themselves don’t pose a risk.  But that was not always the case.  Because of its superior resistance to fire and flame, asbestos was once a popular form of ‘safe’ artificial snow.  It was commonly mixed with mica and sold in the 1930’s as ‘snow drift’ to be liberally sprinkled indoors around Christmas trees, or used to flock their branches.  After the health risks of asbestos came to light, these products were taken off the market.

Resistance to heat and chemical corrosion also made asbestos popular for more than insulation. It was used in more than 3000 different building products including wallboard, paints, floor tiles and shingles until as late as the 1980’s.  Disturbing any of these things, by remodeling or repairing, could lead to asbestos exposure and health risks.  For this reason, the EPA recommends that intact asbestos be left in place.  Asbestos that must be removed should be removed by a trained abatement professional.

A new study from the University of Sydney showed that cannabis had some anti-cancer effects in mesothelioma. Parts of the marijuana plant have been used for centuries to treat a wide variety of ailments. This includes cancers like pleural and peritoneal mesothelioma and cancer-related pain. We have all heard of medical marijuana. Various states have either legalized its use for specific patients. Many are reviewing its legality for various diseases. Cannabis and Mesothelioma Survival Mesothelioma is a deadly disease with few treatment options. Alternative treatments consist of any approach considered non-conventional. This may include herbs, vitamins, minerals, and other natural non-toxic supplements. When used with conventional approaches, these alternative modalities are often called “complementary.” Surveys suggest that over 70% of … END_OF_DOCUMENT_TOKEN_TO_BE_REPLACED