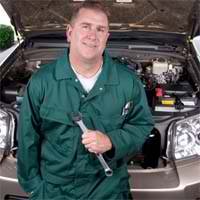 Thousands of the nation’s auto mechanics may be unaware that they could be at a higher than normal risk for mesothelioma because of asbestos exposure.

Asbestos has been used in car manufacturing for many years because of its high heat resistance and strength.  Most commonly found in brake drums and clutches, asbestos has also been used to line the underside of car hoods and in a variety of other engine parts and gaskets. Inhalation of asbestos fibers has been shown to cause a range of health problems of which pleural mesothelioma, a cancer of the lining around the lungs, and peritoneal mesothelioma, a cancer of the lining around the abdomen, are the most serious.

As part of a frequently-cited 4-month study conducted by the Seattle Post-Intelligencer newspaper, reporters visited more than 70 gas stations and car repair shops across the Seattle area to see how workers handle brake parts that contain asbestos.  Their findings were disturbing for auto workers and their families:  Despite government warnings about the health dangers of invisible asbestos fibers, the majority of mechanics who did brake work took few or no precautions to protect themselves.

Unfortunately for mechanics and hundreds of thousands of other industrial workers, asbestos is still commonly used in the products they work with.  When parts such as brake drums deteriorate and need to be replaced, the process of removing the drum and its crumbling asbestos can release millions of microscopic fibers into the air.  Grinding, scraping, blowing with compressed air or hitting the drum with a hammer to release it can spread even more of the deadly dust and increase the risk of mesothelioma.

Because of the danger, the Environmental Protection Agency (EPA) and the Occupational Safety and Health Administration (OSHA) recommend that mechanics wear negative pressure respirators and use vacuums fitted with HEPA filters when working with brakes.  But the Seattle Post-Intelligencer investigation found that only four shops had HEPA vacuum-equipped enclosures for changing brakes.  Although some shops owned respirators, most did not use them and asbestos-containing dust was common. Nine out of ten mechanics and supervisors interviewed were not even aware that some brakes and clutches were still being made with asbestos.

Because mechanics can bring the dangerous fibers home on their clothing and inadvertently expose their families to asbestos and increase their risk for mesothelioma, the EPA also recommends that they wash thoroughly and change clothes before going home.  This recommendation was rarely followed by Seattle-area mechanics.  According to the National Cancer Institute, approximately 580 asbestos-linked cancer deaths are reported in the automotive industry each year.

The MESOMICS project is the most comprehensive dataset of mesothelioma genomics to date. The data in this resource can help researchers to design precision treatments for mesothelioma patients This project was created by an international collaboration between scientists from France, Chile, and the United States. Understanding Diagnosis Malignant pleural mesothelioma is a rare cancer caused by asbestos exposure. There are approximately 2,000 cases of mesothelioma diagnosed in the United States alone every year. Because it is so rare, the treatment options are very limited compared to other types of cancer. The limited treatment options combined with the cancer’s ability to spread without being noticed makes mesothelioma a deadly disease. Median overall survival for mesothelioma patients is a little over a … END_OF_DOCUMENT_TOKEN_TO_BE_REPLACED