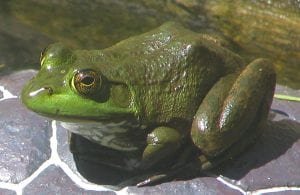 Researchers in Japan believe they may have discovered a new and more effective drug for the intractable asbestos cancer, malignant pleural mesothelioma – and it comes from an unlikely source.

Sialic acid-binding lectin (cSBL) is a protein derived from the eggs of bullfrogs. It has the ability to bind to cell membranes and appears to exhibit antitumor activity through the degradation of RNA. Previous studies have shown cSBL to be involved in a variety of important biological processes.

A New Kind of Mesothelioma Treatment?

In a new report published in the open-access online medical journal PLoS One, researchers from the Tohoku Medical and Pharmaceutical University in Sendai, Japan say cSBL has the potential to extend mesothelioma survival.

The team first tested the protein in test tubes to analyze exactly how it appears to trigger apoptosis (cell death) in pleural mesothelioma cells.

After the effectiveness of cSBL had been confirmed on isolated cells, the researchers tested it on mice that had been inoculated with one of two different types of human mesothelioma cells.

Impact on Mesothelioma Cells is Significant

The researchers also discovered that, when cSBL was combined with pemetrexed, it had a synergistic effect on mesothelioma tumors that was even more powerful than the standard mesothelioma treatment combination of pemetrexed and cisplatin.

Dr. Tatsuta suggests that this synergistic effect might eventually enable doctors to use less pemetrexed, reducing some of the most serious side effects of mesothelioma treatment.

“These results suggest that cSBL has potential as a novel drug for the treatment of malignant mesothelioma,” concludes the report.

In recent years, mesothelioma researchers around the world, desperate to find a cure for the asbestos cancer, have experimented with a number of unusual sources for new drugs.

Last year, Dr. Tatsuta and his team found that polysulfur aromatic alkaloids from the Pacific sea squirt also induced apoptosis in pleural mesothelioma cells by reactivating a cell death signaling pathway that is often turned off in cancer cells.

And in May, researchers in Cameroon identified two types of African plants that appear to have potential as new mesothelioma treatments. The plants, including Elephantopus mollis, Kalanchoe crenata, and four other medicinal plants, contain compounds that triggered cell death when tested on mesothelioma cells in the laboratory.

Researchers at Ohio State University published new tips for a definitive mesothelioma diagnosis. The team says three different tools are important for getting the right answer. One of the biggest challenges with mesothelioma is just getting a definitive diagnosis. Mesothelioma is closely associated with asbestos. But symptoms may not show up until decades after the exposure. This makes it difficult to link the cause and effect. When symptoms such occur, they are often attributed to other, less serious causes. But a recent article in Diagnostic Cytopathology focuses on promising new diagnostic tips. Tips on Using 3 Different Diagnostic Tools Together For this case study, a single 63-year-old patient was used as an example. The team used a combination of tools … END_OF_DOCUMENT_TOKEN_TO_BE_REPLACED