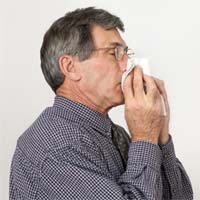 Researchers at the University of Pennsylvania are fighting malignant mesothelioma with an unexpected tool – the cold virus.

The approach fits into a category of treatment known as immunotherapy, which aims to harness the body’s own immune system to find and attack cancer cells. In the current study, Penn Medicine mesothelioma researchers, led by Steven Albelda, MD, and Daniel Sterman, MD, of the Pulmonary, Allergy, and Critical Care Division, injected mesothelioma patients with a modified form of the adenovirus – a virus normally associated with the common cold. The virus had been altered to express high levels of an immune system stimulant called Interferon-a, a protein that can boost the body’s ability to fight off viral infection.

Nine mesothelioma patients with varying stages of the disease received injections of the modified virus directly into their chest cavities. Almost all of them began producing anti-tumor antibodies. Although the four patients with the most advanced mesothelioma showed no signs of improvement, in the remaining five patients there was evidence of disease stability or even tumor regression. In one case that researchers described as “dramatic,” there was partial tumor regression at a site some distance away from the injection site. None of the patients experienced any major side effects from the treatment.

“Since there are very few effective treatments for advanced mesothelioma, it is important that we were able to demonstrate radiographic and biochemical evidence of clinical anti-tumor activity in some of our patients,” said Dr. Sterman, the study’s lead author, in a Penn Medicine press release. “The responses seen in this pilot study, albeit anecdotal, are notable as there are no proven second or third line agents for the treatment of malignant mesothelioma.”

Because of the long latency of mesothelioma, this research could have implications for thousands of people who were exposed to asbestos in the last 20 to 40 years. The new adenovirus immunotherapy approach is now being tested in combination with chemotherapy for early stage mesothelioma in an NIH-funded study at the University of Pennsylvania. Researchers worldwide are anxious to find a method of boosting the effectiveness of chemotherapy for mesothelioma.

Researchers in Iran tested the safety of a new version of the drug pemetrexed in patients with non-small cell lung cancer and malignant pleural mesothelioma. This drug is used to treat these patients when they are not able to get surgery for their cancer. The researchers were able to determine that pemetrexed is safe in patients with non-squamous non-small cell lung cancer. Treatment Choices Malignant pleural mesothelioma is a lung-related cancer like non-small cell lung cancer. It is caused by exposure to asbestos. Treatment for mesothelioma usually involves chemotherapy, radiation therapy, and surgery. Patients may receive more than one type of treatment. This is called multimodal therapy. Pemetrexed is a chemotherapy drug that interrupts the cell replication process that helps … END_OF_DOCUMENT_TOKEN_TO_BE_REPLACED