Home / News / Could Smallpox Vaccine Help Wipe Out Mesothelioma, Too? 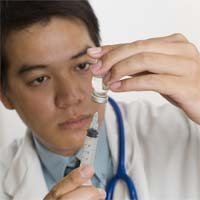 There is new evidence that the active component in the vaccine that eradicated smallpox might one day be used to help do the same for malignant mesothelioma, a rare but universally lethal cancer

Scientists at the University of Pittsburgh Cancer Institute are using the vaccinia virus to help jumpstart the immune systems of mice to attack their own mesothelioma tumors.

Sick mice given the treatment lived longer and developed stronger immune systems, suggesting that the method might enhance any new mesothelioma vaccine and give hope to thousands of people with few treatment options.

Malignant mesothelioma in all its forms is the one of the rarest and most difficult cancers to treat.

In part, this is because mesothelioma cells, like many other types of cancer cells, have the ability to “hide” from the immune system so that killer cells such as cytotoxic T lymphocytes (CTLs) won’t attack them.

The focus of the new immunotherapy research in Pittsburgh was to find a way to unmask these “invisible” mesothelioma cells and make them vulnerable to attack.

The Vaccinia Virus as Delivery System

Vaccinia virus is a large virus that belongs to the poxvirus family. In 1967, a vaccine containing vaccinia virus was introduced that effectively wiped out smallpox around the world within a decade.

Today, cancer researchers are interested in the oncolytic vaccinia virus because of its unique ability to seek out and invade cancer cells.

In the new mesothelioma study, the Pittsburgh researchers used the vaccinia virus to deliver a molecule into mesothelioma tumors that they hoped would serve as “bait” for the body’s natural cancer-fighters.

The molecule the University of Pittsburgh team chose to help bring immune system cells straight to the mesothelioma tumors is CXCL11, a protein or cytokine that works as a natural T-cell attractor.

When researchers armed the vaccinia virus with CXCL11 and delivered it into mesothelioma tumor cells, it not only brought CTLs and natural killer (NK) cells to the site, but it also suppressed the cancer’s ability to ward off attack.

In fact, mice in addition to surviving longer, mice with mesothelioma who received this vaccine also developed a stronger overall anti-cancer response.

“These results demonstrate that intratumoral expression of CXCL11, in addition to promoting local trafficking of T cells and to a lesser extent NK cells, has a novel function as a factor eliciting systemic immunity to cancer-associated antigens,” writes researcher Zuqiang Liu, who has also contributed to a book on the use of oncolytic viruses in immunotherapy.

In a report on the findings in the journal OncoImmunology, Liu calls the CXCL11-loaded vaccinia virus a “superior therapeutic agent” against established mesothelioma tumors.