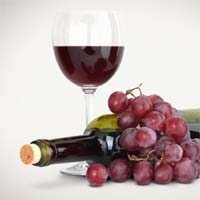 Scientists may finally have found a way to make a compound in red wine more effective against lung cancers like pleural mesothelioma.

Resveratrol, a powerful antioxidant compound found in the skin and seeds of grapes and concentrated in red wine, has long been the focus of anti-cancer studies. Multiple laboratory tests have demonstrated that the molecule is damaging to cancer cells.

Unfortunately, the effectiveness of resveratrol for people with cancers such as pleural mesothelioma or non-small cell lung cancer has been limited because the compound is eliminated from the body before it has the chance to reach the lungs.

Now, researchers at the University of Geneva in Switzerland (UNIGE) believe they may have found a way around the problem. Their discovery could lead to a new way to not only treat but even prevent pleural mesothelioma and other lung-related malignancies.

The first challenge for the Swiss scientists in combating lung cancer with resveratrol was to find a way to get resveratrol into the lungs and keep it there. The team met the challenge by developing a novel nasal administration process.

“This formulation, applicable to humans, allows the compound to reach the lungs,” explains Aymeric Monteillier, a scientist in the School of pharmaceutical sciences of the UNIGE Faculty of Science, and the first author of the study.

Researchers administered the nasal formula of resveratrol to mice that had been exposed to a lung-cancer inducing carcinogen as well as to unexposed mice. After 26 weeks of treatment, nasal administration resulted in a concentration of reveratrol in the lungs that was 22 times higher than it was when reveratrol was given orally.

Even more significantly, the carcinogen-exposed mice that inhaled the resveratrol formula had much less severe cases of lung cancer.

“We observed a 45% decrease in tumor load per mouse in the treated mice. They developed fewer tumors and of smaller size than untreated mice,” says Muriel Cuendet, Associate Professor in the School of pharmaceutical sciences of the UNIGE Faculty of Science.

Among the mice that were not exposed to the carcinogen but still received the resveratrol, 63% never developed any cancer. Without any intervention, mice tended to develop cancer about 12.5% of the time.

What Does it Mean for Mesothelioma Treatment?

The good news for mesothelioma patients is that resveratrol is a well-known and well-documented molecule so no further toxicological studies would be needed to confirm its safety. At the moment, however, the inhalable resveratrol formula is still a long way from being available for use by people in treatment for pleural mesothelioma or other types of lung cancers.

Cancer prevention studies require years of follow-up but, because the reveratrol molecule cannot be patented, pharmaceutical companies are unlikely to be able to monetize it. Still the study’s authors remain hopeful that a drug developer will take an interest in the new research.

In the meantime, there is ample evidence that mesothelioma patients can utilize food as part of their overall mesothelioma treatment strategy. In addition to resveratrol, a number of biologically active compounds found in plants have been shown to help strengthen the body’s anti-cancer immune response and keep patients strong during treatment.

The world’s longest-living mesothelioma survivor, Australian Paul Kraus, considers a diet high in fruits and vegetables a key part of his 20+ year survival, and there is good evidence to support the idea.

Recent studies have been released on

You can read more about Paul Kraus’ survival story and get his advice by requesting a free copy of “Surviving Mesothelioma and Other Cancers”.

Researchers in Iran tested the safety of a new version of the drug pemetrexed in patients with non-small cell lung cancer and malignant pleural mesothelioma. This drug is used to treat these patients when they are not able to get surgery for their cancer. The researchers were able to determine that pemetrexed is safe in patients with non-squamous non-small cell lung cancer. Treatment Choices Malignant pleural mesothelioma is a lung-related cancer like non-small cell lung cancer. It is caused by exposure to asbestos. Treatment for mesothelioma usually involves chemotherapy, radiation therapy, and surgery. Patients may receive more than one type of treatment. This is called multimodal therapy. Pemetrexed is a chemotherapy drug that interrupts the cell replication process that helps … END_OF_DOCUMENT_TOKEN_TO_BE_REPLACED