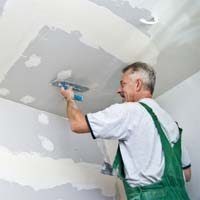 Most homeowners are aware of the risk of handling asbestos insulation, a common part of home construction from the 1940’s to 70’s. Construction workers may be even more keenly aware of the connection between airborne asbestos fibers and deadly mesothelioma than homeowners. But, while asbestos insulation can be easy to identify (and is no longer used in new construction), a recent article in the International Journal of Occupational and Environmental Health is a reminder of the potential danger that still exists in a less obvious place: joint compound.

Joint compound is the paste-like substance that is used to smooth the seams between sheets of drywall. For decades, many manufacturers added chrysotile asbestos fibers to joint compound to make it thicker and more spreadable and to increase its strength and resistance to heat, fire and corrosion.  This practice continued until the late 1970’s. The joint compound or “mud” as it is called in the construction trade, was then covered with drywall tape, which was also sometimes made with asbestos for the same reasons.

“Disturbance of in-place asbestos-containing joint compound continues to be a potential source of exposure during demolition or repair of wallboard,” writes author James Dahlgren, MD, a California physician who specializes in the study and treatment of chemical exposure. This means that construction workers and do-it-yourselfers who cut into old drywall may be exposing themselves to airborne asbestos from joint compound.
Dr. Dahlgren also notes that studies from the 1970’s and 1980’s found exposure levels high enough to trigger mesothelioma even when joint compound was used according to the directions. There were also a number of mesothelioma cases reported among drywall workers.

In his article, Dr. Dahlgren and coauthor Trevor Peckham remind physicians treating suspected mesothelioma cases not to overlook joint compound as a potential source of exposure. Although drywall itself was never made with asbestos, contractors and do-it-yourself remodelers with older homes should be aware of the potential mesothelioma risk in drywall dust because of the joint compound. The EPA has said that there is no safe level of asbestos exposure.

A Canadian study found that tracking trends in mesothelioma at the local level can help officials predict future mesothelioma cases. Most mesothelioma tracking efforts focus on the national scale and monitor cases across a country or region. This study, published in Cancer Causes and Control, looked at mesothelioma cases based on industrial sources of asbestos in Ontario and British Columbia. Growing Number of Cases Asbestos is a toxic material that is used in many commercial and industrial products. It’s durability and heat resistance made it very popular in products like construction materials, textiles, and vehicles. Mesothelioma is a deadly cancer caused by exposure to asbestos. It was first identified as a cancer-causing material in 1977 by the International Agency for … END_OF_DOCUMENT_TOKEN_TO_BE_REPLACED