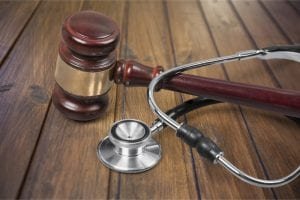 A New Jersey mesothelioma patient and his wife have been awarded $37 million dollars in compensation after a jury agreed that asbestos-laced talcum powder was to blame for the man’s illness.

Stephen Lanzo claimed that Johnson & Johnson talcum powder products like Baby Powder and Shower to Shower, which he had been using all his life, entered his lungs and caused him to develop pleural mesothelioma, an aggressive membrane cancer with no-known cure.

Johnson & Johnson and other talcum powder companies are still fighting claims that their products could cause ovarian cancer. But the mesothelioma community has been especially interested in the Lanzo’s case because it is the first time the company has lost a case alleging its talc products contain cancer-causing asbestos.

How Could Asbestos Get Into Talcum Powder?

Like talc, asbestos, the primary cause of both pleural and peritoneal mesothelioma, is a naturally-occuring mineral. Unfortunately, talc deposits often lie close to areas where asbestos is found and studies have suggested that there is a risk of cross-contamination during mining.

To protect consumers from the risk of mesothelioma, the government instituted strict rules against asbestos in products like talcum powder in the 1970s. For its part, Johnson & Johnson says it has followed those rules and that its products are asbestos-free.

Asbestos has been associated with a mysterious lung-related cancer—eventually named malignant mesothelioma—since as early as the 1940s. Hundreds of companies have paid millions in compensation to mesothelioma patients and their families for failing to warn or protect them against the toxic mineral.

Most people who are diagnosed with mesothelioma were either asbestos miners, worked in a trade, such as construction, plumbing, or electrical work, where they were exposed to asbestos-containing products, or are Naval veterans who spent months living and working on asbestos-laden ships.

A small subset of mesothelioma patients are people who are believed to have contracted the disease by coming into contact with the contaminated work clothes of family members.

The Lanzo case against Johnson & Johnson and its talc supplier, Imerys, is especially significant because Mr. Lanzo is a banker who never worked around asbestos.

After the verdict earlier this week, Carol Goodrich, a spokeswoman for Johnson & Johnson said, “While we are disappointed with this decision, the jury has further deliberations to conduct in this trial and we will reserve additional comment until the case is fully completed.”

The jury will begin deliberations about punitive damages next week.

In the meantime, if you have been diagnosed with malignant mesothelioma, you could be entitled to compensation. The first step is to find the right lawyer. Surviving Mesothelioma can help connect you with a lawyer who is an expert in mesothelioma. Click here for information.

An international group of researchers have provided recommendations for countries to create a mesothelioma registry. Mesothelioma registries are great tools to monitor the negative effects of asbestos. It can help to identify clusters of asbestos exposure. Registries can also track the impact of asbestos reduction programs. Asbestos Health Risks Asbestos is a naturally occurring mineral that has been found throughout the world. Even though it is toxic, it is used in manufacturing and construction in many countries around the world. Mesothelioma is a cancer that is caused by exposure to asbestos. It grows in the lining of organs like the lungs. Generally, those who develop mesothelioma show no signs of illness for a long time after their first exposure. It … END_OF_DOCUMENT_TOKEN_TO_BE_REPLACED