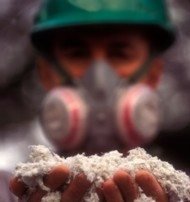 There is more evidence that where you live affects your risk of contracting deadly malignant mesothelioma.

A recent study conducted by a team of Turkish researchers found that people who live closest to naturally-occurring asbestos – especially if they live downwind of it – are more likely than the general public to receive a mesothelioma diagnosis.

Asbestos in the Environment

Asbestos is a mineral that is found in the soil.

For years it was mined for use in manufacturing and construction products ranging from insulation to concrete, wallboard, and even flame retardant Christmas decorations.

It was not until the 1960s that companies started to publically acknowledge that asbestos is also the number one cause of mesothelioma.

Scientists discovered that when people inadvertently breathed in or ingested microscopic asbestos fibers, these fibers could trigger a chain of events that sometimes turned healthy cells cancerous.

Unfortunately, even though many companies stopped using asbestos and dozens of countries banned it, this mesothelioma trigger still exists in the environment.

Some places have higher amounts of asbestos in the soil than others. To perform the new study, researchers focused on one such place in Turkey.

The study included 180 mesothelioma patients, as well as nearly 800 people with either breast or lung cancer, in Diyarbakir Province between 2008 and 2013. Their birthplaces were displayed on a geologic map.

People who lived closest to the naturally occurring asbestos in Diyarbakir Province were more than two-and-a-half times more likely to be diagnosed with mesothelioma than other people in the region.

The team found that the majority of mesothelioma cases were found within 20 kilometers of asbestos sites. The mesothelioma risk was even higher for those who lived downwind.

“The largest concentration of malignant mesothelioma residential areas was within ±30° of the dominant wind direction,” writes study author Dr. Abdurrahman Abakay of the Dicle University Medical School in Diyarbakir.

In the US, naturally-occurring asbestos has been found in more than half of states, including California, Washington, New Jersey, Virginia, and Georgia.

Researchers in Iran tested the safety of a new version of the drug pemetrexed in patients with non-small cell lung cancer and malignant pleural mesothelioma. This drug is used to treat these patients when they are not able to get surgery for their cancer. The researchers were able to determine that pemetrexed is safe in patients with non-squamous non-small cell lung cancer. Treatment Choices Malignant pleural mesothelioma is a lung-related cancer like non-small cell lung cancer. It is caused by exposure to asbestos. Treatment for mesothelioma usually involves chemotherapy, radiation therapy, and surgery. Patients may receive more than one type of treatment. This is called multimodal therapy. Pemetrexed is a chemotherapy drug that interrupts the cell replication process that helps … END_OF_DOCUMENT_TOKEN_TO_BE_REPLACED