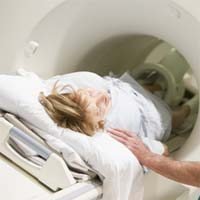 A new way of using a CT scanner may make it possible to detect the signs of mesothelioma earlier in asbestos workers without exposing them to dangerously high levels of radiation.

As with most types of cancer, mesothelioma treatment outcomes are closely linked to early detection. Because people with mesothelioma often have no symptoms until decades after their asbestos exposure, some studies have suggested that CT scans of asbestos-exposed workers may offer a way to catch the disease earlier. But the radiation used in CT scanning carries its own cancer risks.

Now, new research suggests that a technology developed by GE Healthcare may offer a safer way to monitor these workers for signs of mesothelioma. Radiologists and occupational medical experts tested the ultra-low dose algorithm called Veo against traditional CT methods in 27 asbestos-exposed workers at a hospital in Clermont-Ferrand, France.

All of the patients in the study had pulmonary nodules, lesions on their lungs that could be precursors of cancer. Twenty participants had pleural plagues, or thickening of the pleural lining that also indicates asbestos-related damage. The method was comparable in its accuracy to current CT methods, although it was not as capable of picking up what the authors called “interstitial abnormalities”. Most importantly, the Veo approach decreased the radiation dose in the studied workers up to 87%.

The Veo algorithm allows imaging experts to construct a detailed image of a patient’s lungs and lung lining from a CT image that was produced with ultra-low doses of radiation. Typically, an image produced with less radiation provides less diagnostic information for clinicians to work with. The authors of the new study of Veo in mesothelioma detection suggest that the results should be confirmed in a larger patient sampling.

A new study out of India shared new findings on the most accurate way to diagnose mesothelioma. Malignant peritoneal mesothelioma (MPM) is a rare type of cancer. The peritoneum is the membrane that lines your abdominal cavity. MPM forms in this lining and spreads within the abdominal cavity. Mesothelioma is caused by exposure to asbestos. MPM is likely caused by ingesting asbestos that become stuck in the abdomen. It can take up to 50 years for MPM to form and cause symptoms after asbestos exposure. It can be hard for doctors to diagnose MPM. This is because MPM is so rare and the symptoms often look like more common diseases. A delayed diagnosis leads to delayed treatment and a lower … END_OF_DOCUMENT_TOKEN_TO_BE_REPLACED