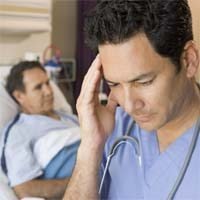 There has been some disappointing news for mesothelioma patients who fail to respond to first-line chemotherapy treatment. A major Phase III clinical study of a potentially promising second-line drug treatment showed no effect on survival.

Mesothelioma researchers had high hopes for vorinostat (brand name Zolinza), a histone deacetylase inhibitor that alters gene expression and protein activity inside cells. Earlier studies found that a small number of mesothelioma patients treated with the drug had stable disease that lasted for 13 months. But in the current study – one of the largest mesothelioma trials of its kind – vorinostat offered no statistically significant survival advantage.

The study involved 660 mesothelioma patients from 92 sites. The median age was 65. Patients were given 300 mg of vorinostat twice daily, three days a week, for three weeks. Researchers were specifically looking at overall survival and how well the medicine was tolerated.

Although the adverse effects were slightly higher in patients taking the drug in comparison to those taking placebo, the tolerability results were comparable. Mesothelioma patients on vorinostat survived a median of 30.7 weeks compared to 27.1 weeks in the placebo group. There were no differences in terms of response rate, forced vital capacity or dyspnea (shortness of breath) score.

Lead researcher, Lee Krug, MD, of Memorial Sloan-Kettering Cancer Center in New York reported the results of the study at a presidential session of the European Multidisciplinary Cancer Congress in Stockholm, Sweden. The study was supported by the drug’s manufacturer, Merck.

An estimated 2.500 Americans are diagnosed with mesothelioma each year. Because the disease typically carries such a poor prognosis, global efforts are underway to find more effective treatments.

A parasite found in cat feces triggered tumor regression in recent animal studies in China. It is a hopeful sign that the same process might be adapted to help human mesothelioma patients, too.   The parasite is toxoplasma gondii. It is a single-celled parasite that can only replicate inside live host cells. It is typically found in the feces of cats or in soil or water contaminated by their feces.  It is capable of entering most cells in most warm-blooded animals.  The goal of the new Chinese study was to determine whether toxoplasma gondii could modulate immune response in tumors. If it can, it might help immunotherapy drugs cause tumor regression in people with mesothelioma and other hard-to-treat cancers.  How Mesothelioma … END_OF_DOCUMENT_TOKEN_TO_BE_REPLACED