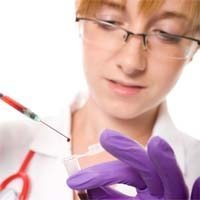 Researchers studying a new immunotherapy vaccine for mesothelioma have released early findings from an ongoing clinical trial and the results are promising.

CRS-207 is based on a genetically modified version of Listeria monocytogenes, a bacterium normally associated with the food borne illness, Listeriosis. The drug was designed to induce a powerful immune response against cells that produce mesothelin, which includes mesothelioma and several other kinds of cancer.

In a presentation at the 40th European Society for Medical Oncology in September, lead investigator Raffit Hassan, MD, of the National Cancer Institute said CRS-207 appears to be improving the odds of surviving mesothelioma in inoperable patients.

“The data in this trial continue to be impressive in the front-line treatment of mesothelioma,” said Dr. Hassan. “We are encouraged by the high disease control rate in patients treated with this combination and will continue to evaluate and track the durability of the responses, which are ongoing.”

In the current Phase 1b clinical trial, CRS-207 is being given along with chemotherapy in patients with unresectable malignant pleural mesothelioma. Patients received two treatments with CRS-207 two weeks apart, followed by up to six cycles of standard chemotherapy with pemetrexed and cisplatin and two more CRS-207 treatments. Patients who are “clinically stable” continue to receive CRS-207 every eight weeks as a maintenance therapy.

Of the 34 evaluable patients, 32 (94%) experienced some level of control of their mesothelioma. In 20 of those patients, mesothelioma tumors actually shrunk in size and in the other 12, tumor growth was at least stabilized. The responses lasted for a median of 5.3 months.

Biopsies on three of the patients showed that the drug appeared to attract immune system cells, including CD8+ T-cells, dendritic cells and natural killer cells to the site of the mesothelioma. These immune system cells can then work in conjunction with chemotherapy drugs to destroy mesothelioma cells. Equally importantly, there were no serious treatment-related side effects.

Based on what researchers are calling “compelling data”, the team expects to move into a Phase 3 clinical trial after the current trial wraps up in 2016.

An international group of researchers have provided recommendations for countries to create a mesothelioma registry. Mesothelioma registries are great tools to monitor the negative effects of asbestos. It can help to identify clusters of asbestos exposure. Registries can also track the impact of asbestos reduction programs. Asbestos Health Risks Asbestos is a naturally occurring mineral that has been found throughout the world. Even though it is toxic, it is used in manufacturing and construction in many countries around the world. Mesothelioma is a cancer that is caused by exposure to asbestos. It grows in the lining of organs like the lungs. Generally, those who develop mesothelioma show no signs of illness for a long time after their first exposure. It … END_OF_DOCUMENT_TOKEN_TO_BE_REPLACED