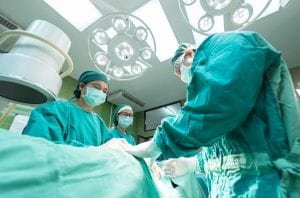 Researchers at MD Anderson Cancer Center say they may have found a way to help predict which peritoneal mesothelioma patients are most likely to develop complications after cytoreductive surgery and intraperitoneal chemotherapy.

Cytoreductive surgery to remove as much of a mesothelioma tumor as possible, followed by a rinse of heated chemotherapy drugs in the abdomen is known as CRS + HIPEC. It has become a standard treatment for people with the abdominal form of the asbestos cancer known as malignant peritoneal mesothelioma.

In a new study, researchers analyzed cases of all patients who underwent CRS + HIPEC at MD Anderson between June of 2014 and February of 2016 to find commonalities among those who did not do well. Their findings may help improve outcomes for some mesothelioma patients.

CRS + HIPEC is used to treat several different types of cancer that occur in the abdomen. Peritoneal mesothelioma tumors grow on the peritoneal membrane which lines the abdomen and holds the fluid that allows organs to move freely and without friction inside the abdomen. It is an extremely rare cancer affecting only about 500 people in the US each year.

Of the 129 patients identified for the new study, 16 had a diagnosis of peritoneal mesothelioma.

According to the new report, 12 percent of the CRS + HIPEC patients studied developed major complications, 13 percent experienced cardiopulmonary complications (related to the heart and lungs,) and 18 percent developed both.

Protein May Be Biomarker for Mesothelioma Treatment Complications

Researchers did find a commonality among patients who struggled following their CRS + HIPEC treatment. Those with major/cardiopulmonary complications were more likely to have an elevated level of B-type natriuretic peptide (BNP), a protein produced by the heart during heart failure.

Elevated BNP is also associated with adverse cardiac outcomes after other types of surgeries.

Disturbingly, this association was most pronounced in the CRS + HIPEC patients who were also being treated with cisplatin, one of the two primary drugs used in the treatment of mesothelioma.

For every 100 unit increase in the BNP on the first day after a patient’s CRS + HIPEC procedure, the risk of major/cardiopulmonary complications was 7.4 versus 1.2 for the remaining patients.

“Multivariate analysis identified increased EBL (blood loss) and a trend toward increased BNP on postoperative day 1 as risk factors for major/CP complications,” writes MD Anderson surgical oncologist Sarah B. Fisher, MD, in a summary of the study in the Journal of Surgical Oncology.

The researchers conclude that measuring the postoperative BNP level of malignant mesothelioma patients and others who have undergone CRS + HIPEC may help to identify patients at risk for major and/or cardiopulmonary complications.

If such complications can be predicted ahead of time, clinicians are more likely to be able to intervene in ways that may maximize mesothelioma survival.

The MESOMICS project is the most comprehensive dataset of mesothelioma genomics to date. The data in this resource can help researchers to design precision treatments for mesothelioma patients This project was created by an international collaboration between scientists from France, Chile, and the United States. Understanding Diagnosis Malignant pleural mesothelioma is a rare cancer caused by asbestos exposure. There are approximately 2,000 cases of mesothelioma diagnosed in the United States alone every year. Because it is so rare, the treatment options are very limited compared to other types of cancer. The limited treatment options combined with the cancer’s ability to spread without being noticed makes mesothelioma a deadly disease. Median overall survival for mesothelioma patients is a little over a … END_OF_DOCUMENT_TOKEN_TO_BE_REPLACED