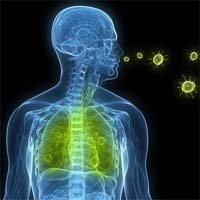 A drug approved to treat skin cancer has produced what researchers are calling “unprecedented” control of malignant pleural mesothelioma.

As announced at the annual meeting of the American Association for Cancer Research which met in Philadelphia in April, pembrolizumab either stopped tumor growth or even reversed it in more than three quarters of the mesothelioma patients tested.

Pembrolizumab (brand name Keytruda) is a monoclonal antibody designed to block a cell surface receptor called PD-1. As part of a phase 1B clinical trial known as KEYNOTE-028, researchers at the University of Pennsylvania gave the drug to 25 mesothelioma patients between March and December 2014. These patients all had tumors that tested positive for PD-1 expression. Most had already been through at least one round of pemetrexed-based chemotherapy.

None of the 25 mesothelioma patients treated in the trial had serious drug-related side effects, although 2 patients had to have dose interruptions because of immune-related problems.  Just as importantly, none of the patients died as a result of treatment with pembrolizumab.

But the best news is that 76% of mesothelioma patients responded to treatment with pembrolizumab – a figure that the researchers call “unprecedented” among mesothelioma treatment protocols. In 13 of the study participants (52%), their mesothelioma tumors, which had not been stopped by other therapies, temporarily stopped growing. Another six patients actually experienced some level of tumor shrinkage.

Pleural mesothelioma, which occurs on the lining around the lungs,  is a one of the rarest forms of cancer. It affects approximately 2,500 people in the U.S. each year, most of whom have lived or worked around asbestos. It is highly resistant to conventional cancer therapies and there is no standard second-line treatment for people who are not helped by chemotherapy.

An international group of researchers have provided recommendations for countries to create a mesothelioma registry. Mesothelioma registries are great tools to monitor the negative effects of asbestos. It can help to identify clusters of asbestos exposure. Registries can also track the impact of asbestos reduction programs. Asbestos Health Risks Asbestos is a naturally occurring mineral that has been found throughout the world. Even though it is toxic, it is used in manufacturing and construction in many countries around the world. Mesothelioma is a cancer that is caused by exposure to asbestos. It grows in the lining of organs like the lungs. Generally, those who develop mesothelioma show no signs of illness for a long time after their first exposure. It … END_OF_DOCUMENT_TOKEN_TO_BE_REPLACED