Home / News / Unusual Chemo Side Effects in One Mesothelioma Patient 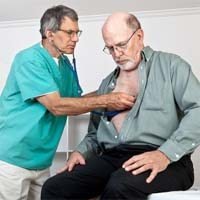 Swiss researches are reporting unusual side effects in one patient arising from mesothelioma treatment with the popular chemotherapy drug pemetrexed. One of the side effects is potentially life-threatening.

In a report in the journal Lung Cancer, doctors from the University Hospital Zurich detail two significant side effects in a 77-year-old mesothelioma patient being treated with pemetrexed. The first is neutropenic enteritis (NE) or enterocolitis. This potentially fatal inflammatory illness of the bowel is most common in patients with severe myelosuppression (reduced ability of the bone marrow to produce blood cells) and has typically been associated with chemotherapy drugs used to treat leukemia.

According to the website Medscape, mortality rates from NE are high and treatment, which can range from conservative medical management to surgery, is controversial. While pemetrexed-induced NE has been reported a few times in lung cancer patients, the Swiss doctors say their case represents the first known instance of NE in a mesothelioma patient. They were able to stabilize the mesothelioma patient’s NE with antibiotics and other supportive measures.

The second pemetrexed side effect, seen in the same patient, was severe hyperpigmentation, or darkening of the skin. The patient is reported to have discoloration over his entire body, excluding the palms of his hands and the soles of his feet. To date, there have been two previous reports of hyperpigmentation in patients receiving pemetrexed chemotherapy. The Swiss case is the first recorded instance of both types of pemetrexed-related side effects occurring in the same mesothelioma patient.

The MESOMICS project is the most comprehensive dataset of mesothelioma genomics to date. The data in this resource can help researchers to design precision treatments for mesothelioma patients This project was created by an international collaboration between scientists from France, Chile, and the United States. Understanding Diagnosis Malignant pleural mesothelioma is a rare cancer caused by asbestos exposure. There are approximately 2,000 cases of mesothelioma diagnosed in the United States alone every year. Because it is so rare, the treatment options are very limited compared to other types of cancer. The limited treatment options combined with the cancer’s ability to spread without being noticed makes mesothelioma a deadly disease. Median overall survival for mesothelioma patients is a little over a … END_OF_DOCUMENT_TOKEN_TO_BE_REPLACED