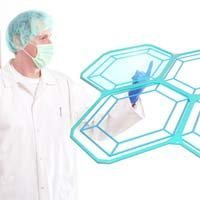 A protein imbedded in the outer wall of their cells appears to have an impact on survival for mesothelioma patients.

That’s the conclusion of researchers with a French mesothelioma study panel known as MESOPATH.  After examining 157 cases of malignant pleural mesothelioma, the group found that a protein called c-mesenchymal-epithelial transition factor (c-MET) could be correlated with survival in more than 75% of them.

C-MET is one of many regulatory proteins found both inside and on the outer membrane of cells.  It is responsible for helping direct critical cell functions such as growth, survival, migration and invasion. But it has also been found to be overexpressed and mutated in a variety of malignancies. When the MESOPATH researchers tested mesothelioma cell samples, they found an overexpression of c-MET in 75.8% of cases, regardless of patient age or gender.  But where the overexpressed c-MET was found appeared to make a major difference in how long those mesothelioma patients would live.

Immunohistochemical staining was used to measure the expression level of c-MET in the interior and exterior of sample cells.  Mesothelioma patients who had a c-MET score higher than 1, but whose overexpressed c-MET was confined to the plasma membrane of their cells, had a median overall survival of 25 months, versus just 13 months for all other patients.

In a summary of their findings to be published in an upcoming issue of the Journal of Thoracic Oncology, lead author Guenaelle Levallet concluded that “c-MET plasma membrane localization could be a relevant prognosis biomarker in malignant pleural mesothelioma.”

The news is important because there are currently few reliable methods for predicting mesothelioma patient survival. In general, patients with the epithelioid variety of mesothelioma tend to do better than those with the biphasic or sarcomatoid varieties. While the c-MET test may shed light on which patients are likely to survive longer than others, it remains to be seen whether the c-MET receptors themselves could be a target for mesothelioma treatments that could change a patient’s prognosis.

The MESOMICS project is the most comprehensive dataset of mesothelioma genomics to date. The data in this resource can help researchers to design precision treatments for mesothelioma patients This project was created by an international collaboration between scientists from France, Chile, and the United States. Understanding Diagnosis Malignant pleural mesothelioma is a rare cancer caused by asbestos exposure. There are approximately 2,000 cases of mesothelioma diagnosed in the United States alone every year. Because it is so rare, the treatment options are very limited compared to other types of cancer. The limited treatment options combined with the cancer’s ability to spread without being noticed makes mesothelioma a deadly disease. Median overall survival for mesothelioma patients is a little over a … END_OF_DOCUMENT_TOKEN_TO_BE_REPLACED