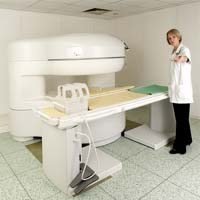 Standard PET/CT beats PET/MRI for diagnosing and staging pleural tumors such as mesothelioma. That is the conclusion reached by a team of radiology researchers in Zurich who evaluated  the two imaging modalities side-by-side for a variety of different cancers, including mesothelioma.

Positron emission tomography is a nuclear imaging technique that produces 3D images of functional or metabolic processes in the body. Patients are given a radioactive tracer (usually FDG, a molecule similar to glucose) and the PET machine detects concentrations of the tracer in body tissues. Because FDG is an analog of glucose, it will concentrate where metabolic activity is highest, often in cancer cells. The combination of PET with computed tomography, an X-ray imaging study that produces tomographic images or ‘slices’ of specific areas, is the most common combination used to diagnose and stage malignant mesothelioma.

Magnetic resonance imaging (MRI) is another type of nuclear imaging. It uses a powerful magnet to produce images of the nuclei of atoms in the body.  It can produce both 2D and 3D images without using ionizing radiation and is considered good at showing contrast between the different soft tissues in the body.

But when 63 patients with mesothelioma or another cancer underwent a single sequence of MRI using a technique called a body coil followed immediately by PET/CT, the standard imaging combination came out on top. The researchers measured the maximum diameters of the lesions shown on CT and MRI images. They then measured overall differences in the detectability and conspicuity [how obvious the lesion appeared] in PET/CT and PET/MRI and examined differences in detectability based on the location and type of lesion being examined.

Among the total of 126 PET-positive lesions, there was “no statistically significant superiority of PET/CT over PET/MRI or vice versa in terms of lesion conspicuity”. However, when the researchers looked specifically at lesions found in the lung area, such as mesothelioma, PET/CT was found to be significantly better than PET/MRI. They also found PET/CT to be better at detecting cancer in the lymph nodes, a key method by which mesothelioma and other cancers spread.

Writing on their finding in Insight into Imaging, the Swiss doctors concluded that PET/MRI “does not match entirely the diagnostic accuracy of standard low-dose PET/CT” for mesothelioma and lung cancers. They suggest, however, that it might be used as a backup solution in some patients, as long as more time was spent to obtain the highest quality MRI images.

A Canadian study found that tracking trends in mesothelioma at the local level can help officials predict future mesothelioma cases. Most mesothelioma tracking efforts focus on the national scale and monitor cases across a country or region. This study, published in Cancer Causes and Control, looked at mesothelioma cases based on industrial sources of asbestos in Ontario and British Columbia. Growing Number of Cases Asbestos is a toxic material that is used in many commercial and industrial products. It’s durability and heat resistance made it very popular in products like construction materials, textiles, and vehicles. Mesothelioma is a deadly cancer caused by exposure to asbestos. It was first identified as a cancer-causing material in 1977 by the International Agency for … END_OF_DOCUMENT_TOKEN_TO_BE_REPLACED