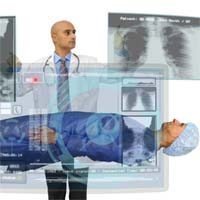 Surgeons from one of the country’s most respected cancer centers say hand-held PET scanners could be a valuable tool for combating deadly mesothelioma cancer.

Researchers at Memorial Sloan-Kettering Cancer Center in New York used the new handheld PET technology to pinpoint and remove 17 suspicious lesions in mice during surgery. The mice had been inoculated with mesothelioma, an aggressive cancer of the tissue that surrounds internal organs. Mesothelioma is caused by exposure to asbestos.

Positron Emission Tomography or PET scanning is a nuclear medicine test that is often used, along with MRI and CT scanning, to diagnose, stage and monitor mesothelioma and other cancers. PET scanning can produce detailed 3-dimensional functional images of internal tissues. The machine detects gamma rays emitted by a radiotracer that is given to the patient before the test. As the radiotracer breaks down inside the body, the energy appears as 3D images on the computer screen. The test is usually performed by a stationary machine prior to mesothelioma surgery or other treatment.

In the tests at Memorial Sloan-Kettering, doctors waited to operate until the test rats had mesothelioma tumors that were 10 mm in diameter according to traditional PET scanning. When they operated on the rats, however, the surgeons found that the handheld PET scanners were able to detect additional smaller tumors during surgery that had not been visible on the traditional PET scan. When these tumors were removed, several were found to be malignant on pathology. The handheld intraoperative scanners proved to have higher sensitivity and higher specificity to certain kinds of rays than traditional PET and were also excellent at detecting malignancy. Earlier tests have also shown the value of having these real-time, close range images, especially during cancer surgery.

In mesothelioma patients who are healthy enough to tolerate it, surgery, as part of a multi-modality treatment approach, has been shown to offer the best outcomes for mesothelioma patients. By potentially improving the effectiveness of surgery, handheld PET scanners may improve those outcomes further. The New York research team concluded, “This novel tool could be used synergistically with PET scan imaging to maximize tissue selection intraoperatively.” Their findings will be published in the Journal of Gastrointestinal Surgery.

Gonzalez, SJ et al, “An Analysis of the Utility of Handheld PET Proves for the Intraoperative Localization of Malignant Tissue”, Nov 25, 2010, Journal of Gastrointestinal Surgery. (Epub ahead of print) Strong, Vivian et al, “Portable PET proves are a novel tool for intraoperative localization of tumor deposits”, Feb. 21, 2009. Annals of Surgical Innovation and Research, 10.1186/1750-1164-3-2

Researchers in Iran tested the safety of a new version of the drug pemetrexed in patients with non-small cell lung cancer and malignant pleural mesothelioma. This drug is used to treat these patients when they are not able to get surgery for their cancer. The researchers were able to determine that pemetrexed is safe in patients with non-squamous non-small cell lung cancer. Treatment Choices Malignant pleural mesothelioma is a lung-related cancer like non-small cell lung cancer. It is caused by exposure to asbestos. Treatment for mesothelioma usually involves chemotherapy, radiation therapy, and surgery. Patients may receive more than one type of treatment. This is called multimodal therapy. Pemetrexed is a chemotherapy drug that interrupts the cell replication process that helps … END_OF_DOCUMENT_TOKEN_TO_BE_REPLACED