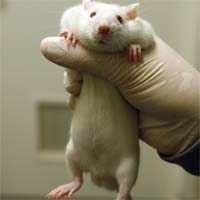 The team at the National Institute of Advanced Industrial Science and Technology in Tokyo have had success using a novel therapeutic compound called JBIR-23 in mice. JBIR-23 is a natural compound first derived from the bacteria Streptomyces sp. AK-AB27 in 2008.  In laboratory test tube studies, its unique chemical structure appears to have a cytotoxic effect on mesothelioma cells and promote apoptosis (cell death).

When the compound was tested on mice with mesothelioma, the effect was the same.  JBIR-23 appears to prevent the further growth of the tumor, without loss of weight or other observable side effects.

The news is promising in light off the fact that mesothelioma is considered an aggressive cancer that is difficult to cure with conventional therapies.  Mesothelioma is caused by long-term exposure to asbestos, a mineral used in construction, insulation and thousands of other products. When inhaled, microscopic fibers of the mineral can trigger a chain of physiological events that can lead to cancer decades later.

Although a number of compounds are being studied for their potential for fight mesothelioma, JBIR-23 is encouraging because, as the Japanese researchers write, “JBIR-23 not only prevents tumor growth but also leads to a reduction in the volume of tumors.”  In a report in a recent issue of Cancer Letters, the team concludes, “These results suggest the JBIR-23 is a promising lead compound for use in MPM-specific therapeutic drugs without any side effects.”

In the U.S., mesothelioma affects approximately 2,000 to 3,000 people every year and its incidence is still on the rise, due to the long latency of the disease.  Early, accurate diagnosis is crucial to initiating treatment in time to slow the tumor’s growth.  Currently, first line treatments for mesothelioma include cisplatin-based chemotherapy, surgery and/or radiotherapy.

The MESOMICS project is the most comprehensive dataset of mesothelioma genomics to date. The data in this resource can help researchers to design precision treatments for mesothelioma patients This project was created by an international collaboration between scientists from France, Chile, and the United States. Understanding Diagnosis Malignant pleural mesothelioma is a rare cancer caused by asbestos exposure. There are approximately 2,000 cases of mesothelioma diagnosed in the United States alone every year. Because it is so rare, the treatment options are very limited compared to other types of cancer. The limited treatment options combined with the cancer’s ability to spread without being noticed makes mesothelioma a deadly disease. Median overall survival for mesothelioma patients is a little over a … END_OF_DOCUMENT_TOKEN_TO_BE_REPLACED