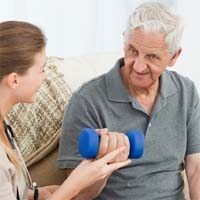 There is new evidence that mesothelioma can affect more than just the part of the body where a tumor occurs. Along with lung-related symptoms such as coughing and shortness of breath, a new study suggests that shoulder pain can also be an early sign of malignant pleural mesothelioma.

Polish researchers reached that conclusion after studying the cases of 49 mesothelioma patients treated at the Central Clinical Hospital in Warsaw between 2006 and 2012. In looking over the patients’ medical records, they found that seven of the patients (14.3%) listed shoulder pain as the very first symptom of mesothelioma.

In most cases, the shoulder pain among mesothelioma patients was relatively mild, with an average severity of 4 on a scale of 1 to 10. But five of the seven patients who reported shoulder pain also said they had limited mobility in their shoulders. In one case, the limited motion and dysfunction were “at an advanced stage.”

Two of the mesothelioma patients were also found to have neuralgia, a stabbing or burning pain that occurs along a damaged nerve.

Although the study makes it clear that shoulder pain can sometimes go along with early-stage mesothelioma, what is less clear is why this pain occurs. Pleural mesothelioma grows on the membrane that surrounds the lungs, eventually restricting the ability to breathe and triggering more common symptoms like coughing, chest pain, and dyspnea (shortness of breath).

Where shoulder pain is concerned, the researchers conclude that mesothelioma may have a pleiotropic effect on the body, meaning that it can impact unrelated body systems, such as the nervous system and the motor system.

The MESOMICS project is the most comprehensive dataset of mesothelioma genomics to date. The data in this resource can help researchers to design precision treatments for mesothelioma patients This project was created by an international collaboration between scientists from France, Chile, and the United States. Understanding Diagnosis Malignant pleural mesothelioma is a rare cancer caused by asbestos exposure. There are approximately 2,000 cases of mesothelioma diagnosed in the United States alone every year. Because it is so rare, the treatment options are very limited compared to other types of cancer. The limited treatment options combined with the cancer’s ability to spread without being noticed makes mesothelioma a deadly disease. Median overall survival for mesothelioma patients is a little over a … END_OF_DOCUMENT_TOKEN_TO_BE_REPLACED